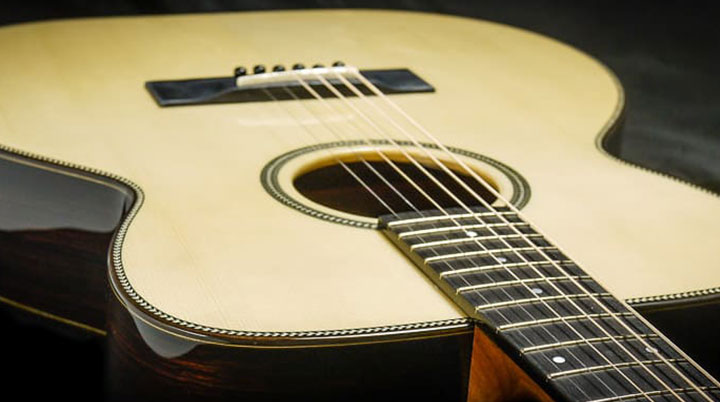 English luthier NK Forster announced a major professional milestone today, celebrating 30 years of guitar making in Newcastle upon Tyne. His business, NK Forster Guitars, makes a variety of guitars and other stringed instruments for both amateur and professional clients.

“It’s hard to believe 30 years have passed since I started in this business,” said Forster. “I’ve made some nice instruments in that time. And I think they’ve brought people a lot of pleasure.”

Forster started his career in lutherie in 1988. Forster’s grandfather had taught him to play guitar when he was 13. He soon became interested in how they were made. When he was 17, a teacher asked Forster what he’d like to do for a living, to which he replied, “make guitars.” The teacher introduced him to the renowned Hexham-based luthier, Stefan Sobell. Straight out of school, Forster began an apprenticeship with Sobell. He worked with Sobell until 2003, taking a break from 1990 to 1992.

In 2004, Forster opened his own workshop. “I’m lucky,” Forster added. “Guitar making is no way to get rich, but you could say I’m rich in other ways. I never mind going to work, and it’s held my interest the whole time.” Today, his shop produces a wide range of flat top guitars as well as arch top guitars, mandolins and bouzoukis.

“It’s an honour to work with these materials,” Forster said. “Thirty years ago, makers weren’t thinking enough about the environment, but as time goes on, it became clear to me that you have to make something that can last for generations. Something you can pass onto your children. Not just something that’s disposable. It can take 200 years for a tree to grow. What you make from it should last just as long.”

How is Forster celebrating his 30 years of making fine handmade guitars?  “By not working!” he exclaimed. “Mrs Forster and I are having a mini-retirement—traveling around India, Sri Lanka, Australia and Japan. Later in the year we plan to relocate so we’re looking for just the right spot. Then it’ll be back to the workbench. I’m very lucky to have such patient customers. Most people wait a year or two, or more to get their instruments.”

Forster has other interests outside of instrument making. He spent much of his twenties playing in a band and practicing Aikido. He then began practicing yoga and meditation, which is good for loosening up after a long day leaning over a workbench. Forster is also an accomplished writer. He is the author of the books “Making a living in lutherie: from amateur to professional,” “Between the ideal and the possible” and “The luthier blog ebook.”