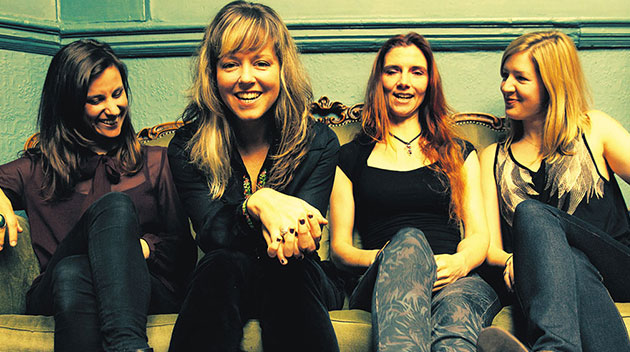 Firstly, do you consciously maintain a dual nationality in your head, looking at the world from an Australian and British perspective, or do you have one place that is ‘home’?

That’s a very good question and one I’ve spent a lot of time thinking about. In fact, the whole of my latest album, ‘Dear River’, is dedicated to this exact question, the question of ‘home’. In preparing for the album, I spent quite a bit of time researching and reading around the subject, and I discovered that for many people home is much more than just a place. Home can be the people we know, stories we inherit, language, culture, politics and much more. I also looked at my own life story. I grew up in the south west of Australia by a river called The Blackwood. When I was nineteen years old, I set off with a backpack, a guitar and a wish to see the world. My adventuring took me to Canada, Brazil, Hong Kong, numerous countries in Western Europe, the USA and eventually settling in the UK. Twelve years on, I’m still in the UK and currently living in Stroud, Gloucestershire. But my music has the good fortune of taking me all over and I’ve since established close friendships and affinities with places in which I spend quite a lot of time and therefore give me a sense of home. Right now, those ‘homes’ are: Stroud and London in the UK; Bridgetown and Perth in Western Australia; Bremen in Germany; Nashville, Tennessee, and Stockholm, Sweden. So I guess my perspective is ‘international’ rather than Australian or British or even dual.

However, if multiple choice was not an option, then I would have to say my truest sense of home is by The Blackwood River in Bridgetown in the south west of Australia where I grew up and where my parents still live now. I go back to visit as often as I can.

Do you feel it is important, or even necessary, to have one place that anchors you?

I think it’s important to have at least one place that anchors you. As explained above, I have many places that anchor me and mostly it’s through the people that I know in each of these places and not necessarily the place itself. It’s about experiences and interactions, familiarity with those around you and a sense of community that does much of the anchoring I think. However, when I sit down by the Blackwood River, or go for a walk through The Heavens (a beautiful woodland in Stroud), both these places give me a feeling of peace and grounding. Being anywhere outdoors and in nature is definitely the antidote for me after touring which primarily takes place in cities.

Does your not living in Australia full time give you a different perspective on the country?

Absolutely. Initially when you move to a different country, you have a feeling of displacement and otherness. It takes time to understand how people are; their humour, what they talk about, how they talk about it, accents and slang. After having lived in the UK for so long, I no longer have this same sense of isolation but regularly still some cultural reference will go completely over my head and people will be like ‘What! You don’t know (insert incredibly famous British celebrity here)’ And a year or so ago I realised that I still don’t know the names of the trees or birds. In the south west of Australia I could tell you almost every bird, tree and flower name. So in many ways, despite also feeling very at home here in the UK, I still often feel like I’m travelling here, and I can imagine this will always be the way. I don’t mind that.

“I have sometimes wondered how much the war still exists within our family, whether the pain and silences which seem so much part of our legacy, which we have struggled so much to overcome and which are still defeating us, are shadows of the war…” (Alison Croggon ‘Navigatio’)

Home is not only a place, but also is made up of the people we know and the stories we inherit from our family and ancestors.
My grandparents on my mum’s side were Dutch and emigrated to Australia in 1952 by boat having never been to Australia before. Like many WW2 survivors, they set off in search of a new beginning and to leave behind the trauma of having lived through a war.

My grandfather didn’t talk much about his previous life in the Netherlands, so there were many questions that went unanswered.

“The past is as mysterious as the future: we never really know what happened there.” (Alison Croggon ‘Navigatio’)

Since my grandparents’ death, my mum has attempted to piece together their lives in Holland and she sent me a parcel containing a journal written by my grandfather’s brother that documents their time in exile along with some letters exchanged between my mother, in Australia, and her distant relatives in the Netherlands.

Most of my song ‘Letters’ is written from the perspective of my grandfather Reinier, and his brother Frans, and their time in exile during the war. They fled Rotterdam leaving behind their family and their girlfriends (my grandmother to be) and hid out for three years in woodlands, farm houses and old factories along the German/Dutch border. During this time they both attempted to get word back home to let their loved ones know they were still alive. Imagine being a mother and not knowing if your sons were alive or dead. Imagine waiting, watching the clock for hours on end, for years on end, waiting for a sign, a message, a letter.

These are the stories we inherit, and they make us who we are.
Ghost Narrative

“The quandary is, of course, rooted in the problem of how indigenous and European cultures can coexist… Perhaps it is the land that holds the answers.” (Michael Jackson ‘At home in the world’)

“We have been too far apart.” (Archie Roach)

During a visit back to Australia I went for a walk with Josh Whiteland, a Noongar (South West indigenous group) man of the Wardandi clan (coastal area near Margaret River). It was a life-changing experience. We walked along the gravel road that runs alongside the Blackwood River, the area I had grown up in, the dirt track I had ridden my horses along. I told him what “home” meant to me: my affinity with the Australian landscape, my European ancestry and my home-away-from-home in Stroud, UK, where I now live. Then I asked him what “home” meant to him. He told me that for indigenous Australians, the land and its people are interdependent. Every rock, tree, hill, valley, river and mountain range has behind it a story of creation and the spirits of their ancestors. He told me things about the land that shocked me, such as that during the settlement of Bridgetown, around three hundred Noongar people were given small pox-infested blankets and thrown into the Blackwood. He told me that the Noongar name for Blackwood is Gorbalbilliup, meaning ‘intestine river’ given for the intestinal shape it makes from an aerial perspective as it winds its way westwards to the coast. He said that before European settlement, the river with its many rock pools, was a birthing place, a symbol of fertility and very much a matriarchal area.

It was an incredible experience to walk side by side with this man and to share, so openly, our relationship to the land and our definition of home. We acknowledged the brutal history of colonisation and the existing distance between our cultures but, more importantly, we focused on sharing with one another: listening and learning with respect for our differences and at the same time, discovering our similarities. It was highly symbolic this walking together and we parted with a wish that in the near future, our cultures would be able to do exactly this: walk side by side in harmony, listening and learning from one another, coexisting peacefully in this country.