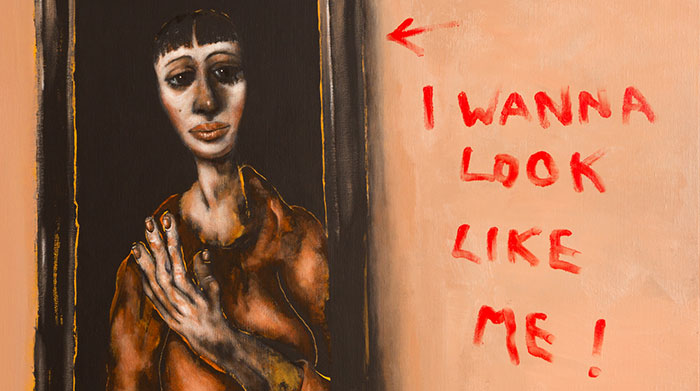 Eleanor McEvoy releases her new album ‘Naked Music‘ on Friday, 5th February 2016, and features album artwork by the artist Chris Gollon. The pairs collaboration is much more than just cover art however, Eleanor was, at the time they first met, finishing some recording where she was “studio-performing”, playing hers and others’ songs as she might at her solo shows. The recordings have a very exposed intimacy, so it seemed a possibility that Chris should be asked to do a painting for the cover in this solitary context.

As a body of work, Eleanor’s recordings acquired the name ‘Naked Music’, which would give a better focus to the two artists’ desire for mutual expression. Being offered this title, and with some song suggestions, Chris was so taken with the songs he completed four paintings in response – two on the ‘Naked’ theme, and two others related to song titles and lyrics. The first ‘Dreaming of Leaving’ was written by Eleanor and Lloyd Cole. The other ‘Lubbock Woman’, a downtrodden cameo, is a song by West Texan legend Terry Allen. The paintings were such a hit, that all four talked their way into the Naked Music CD artwork.

Now there is going to be a full Chris Gollon exhibition on the theme of ‘Naked Music’, with his latest series of paintings inspired by all the new album tracks by Eleanor McEvoy, some co-written with Dave Rotheray (from The Beautiful South), Lloyd Cole and Nat Johnson. Visitors can come and experience the new Eleanor McEvoy album and the new Chris Gollon imagery side-by-side.

The exhibition at Gallery Different (in association with IAP Fine Art) will run for three weeks from 25th January, 2016. Having performed at the opening, Eleanor will be touring England and Wales.