Earworms For The Thinking Generation 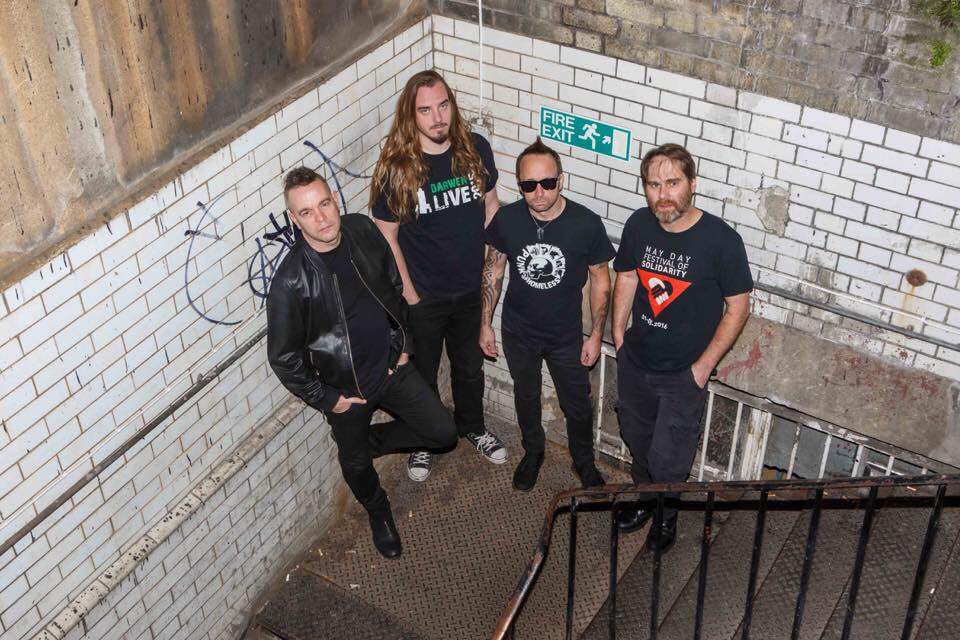 With current circumstances you’d think that we’d be awash with decent social commentary and bands who’d want us all to think before we act. Merry Hell do great work but they could do with a hand. Enter Headsticks with C.O.W. the first album of 2021 to delve deeper in its quest for answers. Our man with them at the barricades; Nick Barber.

Riding a wave of critical acclaim for their new album “C.O.W” (keep looking and listening to find what that stands for…!) North Staffs/South Cheshire outfit Headsticks are raising a lot of eyebrows amongst those who had not been previously aware of what they’re about. Formed in 2012, evolving out of “Irish folk chaos” band Jugopunch  – which evolved into the Clay Faces, the band rested on its current line-up of Nick Bayes (formerly Tower Struck Down)  -bass, Doon – guitars, Tom -Drums and Andrew on Vocals and occasional harmonica – and has gone from strength to strength ever since.

In the years since their founding, the line-up has remained stable and they’ve played a wide variety of gigs – everything from opening for Lindisfarne, to Canadians punks DOA! The band themselves admit to most feeling at home when they’ve played with the likes of New Model Army and Spear of Destiny, but they’ve always been able to bridge audiences and genres – and found their own niche amongst them all. They’ve collaborated too with Merry Hell, where the bond of traditional and protest themes has been strong and with Steve Ignorant of Crass, who’s contributed vocals to the Headsticks track “Big Game Hunter”, as well as there being backing vocals from Carol Hodge of Steve’s band on C.O.W.

Being amongst such company, the band feel that they have been labelled with the tag of “political” – but rather than seek that  out themselves,  they see themselves as social commentators with a compassionate outlook. It would be unfair to label and limit them thus, but unfortunately the present day is offering a great deal of subject matter to that end. The band have supported the likes of We Shall Overcome, but are quite open-minded about politics and aren’t hard-bound by dogma; if they can do good, if they can provoke thought and raise discussion and affect positive change, they will – which to these ears is a very noble and wise attitude to have.

Hitting them between the eyes, Headsticks tell it like it is, sometimes the truth hurts!

With some of the band’s activities on the back burner because of lockdown this gave them the chance to complete the album and use streaming to further their reach – it’s been a case of making the most of the situation and spreading their “Folk music for now” as Andrew describes it. The album embraces this outlook, with each song being an acutely observed slice of modern life. Issues tackled range from the personal to the universal. On a personal level, there’s “Tyger Tyger” – inspired by Blake and quoting him , which addresses issues of mental health and self-harm and the persona of a raging drunk in the bleakness of  “Sing Danny Boy”. Use of a third person stance gives the songs an objectivity and insight and allows for figurative and literal readings that gives a fine lyrical edge.

Such is also the case with the songs that deal with more widespread issues and address the fact that politics isn’t only about tribal party machinations, but it’s about…well… everything in life! “This Ain’t Politics” addresses that issue, of those who aren’t able to differentiate between party politics and basic human decency and those who have a confused attitude about social responsibilities with ideology and flag-waving – such is its maturity and objectivity, it should really be played in n every secondary school PSHE lesson. “Naked” follows similar themes – while, in part being a narrative about the music industry, it has a wider narrative about social artificiality too -and the inability of many to recognise that artificiality. “Burn” and “Opium” adopt a similar critical attitude – offering a humanist perspective on how organised religion can be seen as just a game of power and control – if people were only to open their eyes – it’s not criticising religion per se – it’s criticising the systemic abuse of forms and institutions of religion – and that’s one of the core strengths of the band – the ability to articulate social, political and personal complexity in accessible forms.

There’s passion throughout the album too – because, if you aren’t angry and passionate about that which Headsticks are singing, then maybe you need to be. “Speak Out” – a first recorded composition by drummer Tom, based on the famous writing of Pastor Martin Niemöller updates the original to question many modern memes and themes and “Red Is The Colour” (again it’s a multi-edged reading of the colour and its associations) about war-mongering create a rhetoric that’s fiery in intent. But some days, there’s burn-out too – and “Peace And Quiet”, a cry for help for the planet, but also an admission that on some days you just can’t seem to be up for the fight…and there’s more besides – there’s the darker, confusing side of emotional life in the Violent femmes-esque “Miles and Miles” and also in “A Tear For Yesterday” and the beauty and pain of life in “Red Sky” too. The album certainly responds to repeated listens and will reward the listener with each spin.

Now that’s it out in the big, wide world and being extremely well-received, in the short term the band are making plans to take it out on the road. Three quarters of the band, at the time of writing had been partially jabbed, so rehearsals are set to kick off again and the first few dates are being pencilled in, in the autumn. In the longer term, the band just want to keep evolving naturally – there’s no pressure to churn out songs for the sake of it, but to write and record when the inspiration strikes and produce work that that is honest, emotive and affecting. Live, the band are a force to be reckoned with – take what’s on the album and add even more fire and passion and you’re somewhere near to encapsulating the Headsticks experience. If you’re not familiar with the band, “C.O.W” (not telling you what it stands for – listen to the album!)  is a good starting off point to move musically backwards and forwards with the band – go and see them and you too will start to see and question the world around you with more open, investigate eyes.