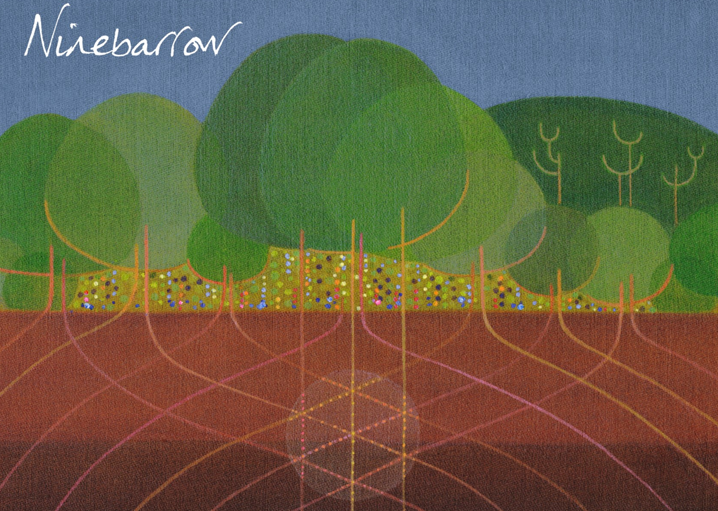 The arboreal-titled album A Pocket Full of Acorns is the pair’s fourth release and, if proof were needed, shows how they have further honed their already classy craft.  It will be accompanied by a beautifully presented songbook and to be released on March 5th,  it follows on from the acclaimed The Waters &The Wild (2018).

2020 was not the year Ninebarrow, or anyone, had in mind. But as touring (both as a duo and first ever tour with their band) went out the window, they quickly filled the void by developing some of folk music’s most technically sophisticated streamed gigs; produced The Hour of the Blackbird, a lockdown charity single with two choirs described by Radio 2’s Mark Radcliffe as ‘undoubtedly one of the folk tracks of the year’ and used the time and space to perfect this latest studio album – a beautifully balanced, root and branch affair.

Says Jon: “It feels all the sweeter to be able to release this collection into the wild given all the detours we had to make in 2020.  Our music will always be inspired by the incredible landscape and history of our native Dorset as well as our sense of home and belonging. But these days we can’t help but be moved by the many changes happening to our planet and society – we hope this fourth studio album reflects that.”

Jon and Jay relinquished their full-time jobs as a teacher and GP back in 2012 and took a leap of faith into the music business – a gamble that clearly paid off.

Nominated for the coveted Horizon award (Best Emerging Act) at the 2017 BBC Radio 2 Folk Awards the Dorset duo have carved themselves a distinctive niche on the folk roots scene for their outstanding harmonies, high production values, engaging original songs, poetic lyricism and magical instrumentation ranging from the delicate to the lustrous.

Named after Nine Barrow Down in the Purbeck hills, their first release While the Blackthorn Burns was voted FATEA Magazine’s Best Debut Album of 2014 and was followed by Releasing the Leaves (2016) which prompted a string of ‘Best Duo’ nominations. By the time of their third release The Waters & The Wild Jon and Jay had firmly developed a signature sound – widespread critical acclaim came thick and fast with The Guardian selecting it as one of their albums of the month.

At the core of the sound are Jon’s multi instrumental skills (piano, ukulele, tenor and octave mandola) with Jon and Jay sharing duties on the distinctive reed organ and vocals.

Says Jon: “We set out to create something honest and organic with an up close and personal quality and sonically somewhat different from what has gone before. I hope we’ve achieved that.”

In the week leading up to the album’s release Jon and Jay will lead a socially distanced working party in the planting of 1,000 native English trees and 200 shrubs to form ‘The Ninebarrow Woodland’. To be sited on three acres of land near Gillingham in north Dorset, the ambitious project will see saplings of 10 different species planted, half of which will be English oaks, tying neatly in with the album’s ‘acorn’ title.

Ninebarrow have also announced a special streamed album launch show which will take place on Saturday, March 13, 7pm at St James’ Church, Poole  to tune in you can visit www.ninebarrow.co.uk/live.

“Surely now more than ever we need to take action to ensure future generations and life on this planet, in all its myriad forms, have something to inherit.”

A Pocket Full of Acorns is released on the Winding Track label on Friday March 5 (CD and DL format) and exclusively available from the Ninebarrow website.  For more details visit  www.ninebarrow.co.uk