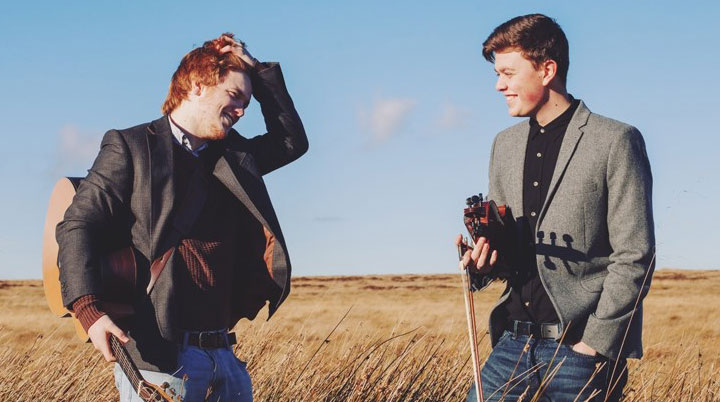 It could be their pull no punches songwriting. It could be Russell’s remarkable voice and Algar’s distinctive, fluid fiddle. It could be their inventive takes on traditional songs, their unseen empathy, brilliant tune sets or the way they tackle topical issues.

Whatever it is Greg Russell and Ciaran Algar have got it, making a huge impact from the first moment they emerged on the UK folk scene.

Still only 24 and 22, Sheffield-based Greg and Stoke-on-Trent-based Ciaran released their first album The Queen’s Lover in 2012 when both still at school and enjoyed a rise as rapid as a Bullet Train when just six months later they landed the Young Folk Award at the 2013 BBC Radio 2 Folk Awards.

In 2014, they found themselves at the Royal Albert Hall clinching the Horizon Award for Best Emerging Act and in 2015 they were nominated for Best Duo.

Drawing on a range of influences, their intuitive musical rapport increasingly in evidence, Russell and Algar released second album The Call in 2014 and, in 2016, the acclaimed The Silent Majority.Now with solo albums under their belts (Greg’s Inclined to be Red and Ciaran’s The Final Waltz) and performances in other line-ups (most notably Algar with Sam Kelly & The Lost Boys and Russell in The Transports and his own multi-artist protest song project Shake the Chains) they are back with an assured fourth studio album.

Released on RootBeat Records on April 13th  Utopia and Wasteland marks another milestone in their versatile and exceptional career.

Previously focusing mostly on putting their stamp on traditional songs or covers, here they head strongly out into the original songs and tunes world, with nine of the 11 tracks being their own compositions.Recorded over three months in Devon, there’s a big leap in sound and production values courtesy of prolific producer Mark Tucker who also adds percussion, bass and backing vocals to Greg’s unmistakable voice and acoustic guitar and Ciaran’s fiddle, tenor banjo, electric tenor guitar, bodhran and vocals.Russell and Algar set the bar high right from the start. Now consolidating their reputation at the cutting edge of folk, this young duo continue their upward spiral with this emphatic calling card that showcases their constantly evolving prodigious talent. Their musical prowess, confidence and ambition shines ever brighter.

They are showcasing the album now, so if you can,  catch them live at the following venues:

Here’s a fun video to whet your appetite !!

‘Fearsomely talented Greg and Ciaran seem to have slotted into a new groove with this album. Proof of what happens when great musicianship hones its talons on the road. Damn good stuff.’ – Mike Harding