Divisions On A Ground – Richard Harvey 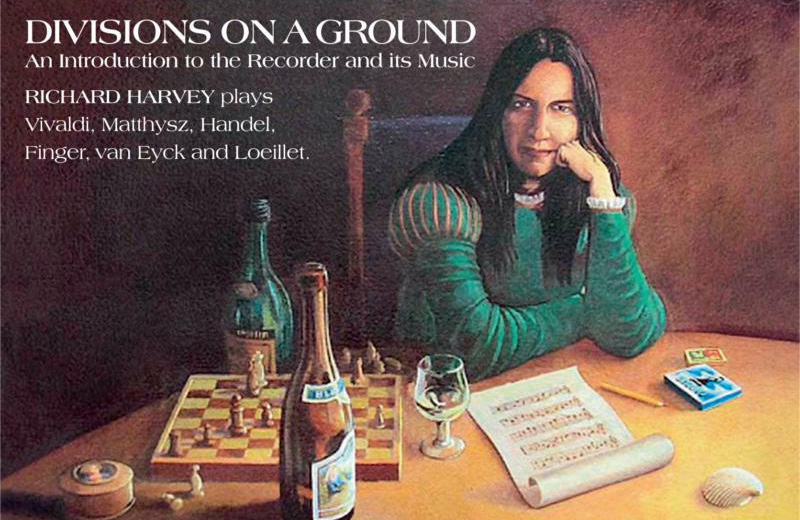 Those amongst you with long memories might recall Mr. Harvey who surged keyboard sounds as well as merry recorder tootling for prog/early music masters, Gryphon. Prog of course with classical overtones and space for endless improvisation – if you knew what you
were doing- suited those seeking fresh fusion between genres. The important bit in that last sentence fell between the hyphens, as too many bands back in the early 70s who tried to be prog were clearly without smarts or a road map to where they wanted to go. Not so, Richard Harvey who had a clear direction and the ability to do far more – ‘Divisions On A Ground,’ is that far more.
Harvey’s musical skills are without question, subtitled ‘An Introduction To The Recorder & Its Music,’ this album acts not only as that but also as reference containing as it does detailed history and background notes on development of the recorder over time and the actual instruments used in the recording. As you might expect, this is linked only to Gryphon in the fact that Harvey uses his love of early music as a springboard and source for his electric improvisation; this is as much a classical offering as anything, names like Handel, Vivaldi confirm the composers covered. All recorded in 1974 at St. Paul’s Church, Wimbledon, whilst there are shorter selections most are suites of ten minutes plus with three or four movements within. The whole is atmospheric, eminently listenable, harpsichords and violins, give a Renaissance feel to proceedings, music for a summer’s afternoon – now all we need is the weather! Richard Harvey could have succeeded in any musical field, he is a perfectionist and highly skilled musician, these days working in film and TV, scoring and arranging with the likes of Paul McCartney, Kate Bush, Elvis Costello, for such movies as the Harry Potter franchise. He also keeps up a prodigious work rate of classical and early music releases. All of this means he departed from Gryphon a couple of years back, they changed personnel and moved on. ‘ Divisions On A Ground,’ however was where he first played his scholarly hand, when long hair and experimentation was accepted behaviour from rock musicians, issued on Transatlantic, an acknowledged folk label, even then Harvey was genre hopping with alacrity. Refitted by Talking Elephant, as far as I can tell this is its first outing on CD.