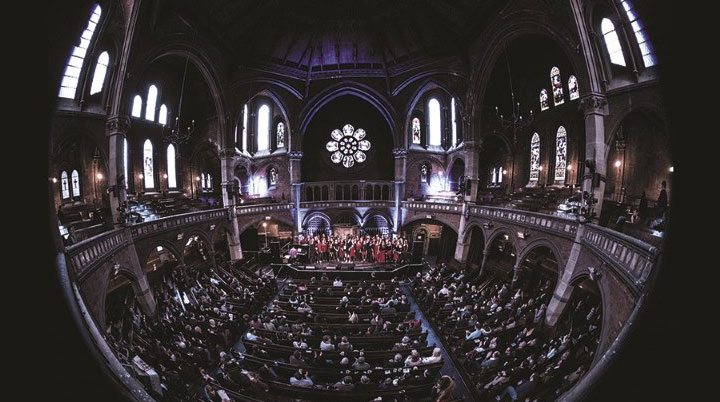 The most magical concerts in London are back to fill your Saturday afternoon with music, while you relax and enjoy a cuppa in one of the capital’s best loved venues. Every Daylight Music gig is a unique experience; nowhere else has such a friendly, warm atmosphere, or such a diverse programme of artists.

May 23 Winter Villains, Poppy Ackroyd + Jon DeRosa
The season kicks off with a name to watch; Poppy Ackroyd is a classically trained pianist and violinist who weaves delicate, atmosphere music by manipulating and multi-tracking sounds from just those two instruments. On the same week, you can hear Cardiff’s Winter Villains and their intricate chamber pop music; the duo were nominated for the Welsh Music Prize in 2013 and Jon DeRosa from the USA, whose new album Black Halo is out via Rocket Girl on 25 May.

June 6 School of Noise, Sarah Angliss + Astra Forward
At the beginning of June, imaginations will be running riot this week with children’s electronic ensemble School of Noise. Sarah Angliss will bewitch with theremin, saw and ancient instruments. Not forgetting Astra Forward (of The Robot Heart) will play a solo set of her intricate and beautifully otherworldly songs.

June 27 Lucy Claire & Imogen Bland, HART + Thomas Stone
Lucy and Imogen present a stark and beautiful exploration of Sylvia Plath’s “The Moon and the Yew Tree”, through music and movement. It’s the first time that Daylight has welcomed a dancer to the stage, making this an even more special occasion. You’ll also hear HART that week; fresh from collaborating on a string arrangement with Nico Muhly, HART will fill the chapel with his ethereal shoe-gazing dream-pop and Thomas Stone will create immersive music using contrabassoon, samplers and activated percussion.

July 4 Piney Gir, Rodney Branigan + Player Piano
July brings an American Independence day special, led by the wonderful Piney Gir. Hailing originally from the American Midwest, but since claimed by London, Piney will be embracing her heritage as she performs songs from her dazzling sixth album due out on Damaged Goods. Piney is joined by Texan guitar virtuoso Rodney Branigan and glam pop singer Jeremy Radway aka Player Piano.

July 18 The UCC Handbell Ringers + Ryan Teague/Gamelan
A Bells and Bronze afternoon will ring out this season of Daylight in style. The UCC Handbell Ringers are a Texan choir of 19 teenagers, who regularly tour the world and delight audiences everywhere they play. In addition the afternoon will also feature a new and exclusive composition premiere ‘Storm or Tempest May Stop Play’ by Ryan Teague with Gamelan Ensemble.