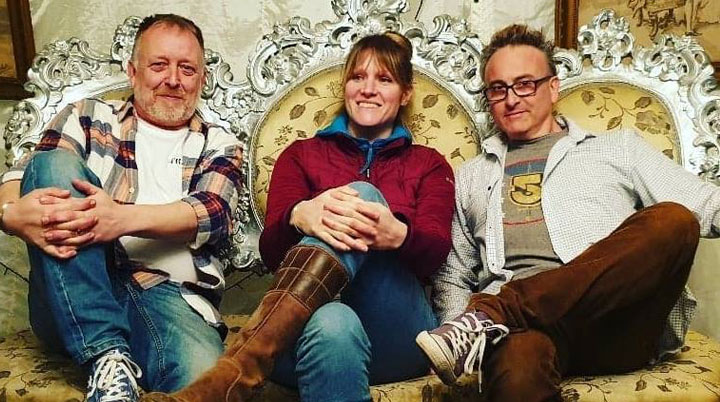 If there’s a league for being in lots of bands at once – what does a poor folkie have to do to earn an honest pound? – beside Benji Kirkpatrick and Graeme Taylor, Simon Care’s surely Premiership material; have melodeon will travel.

Forming Banter a couple of years back, a positively hopping debut revealed a melange of influences, trad dance, pop, rock, jazz, soul and funk all got their noses over the line in a wonderful stew which set their controls firmly for wide horizons. Now comes album number two which caps a wonderful summer of gigs all over the country and the launch of an autumn tour of equal geographical diversity. What they’ve done to extend themselves is that they’ve upped their own compositions and gone for Anglofying – did I just invent a word – the Police! Okay just one track ‘Roxanne,’ but you get the idea that they’re cavalier and perhaps just a bit endearingly bonkers.

Opening Nina Zella’s ‘Just Love,’ is a Steely Dan meets country dance delight with soulful vocals from Miss Zella adding to the rhythmic flying of drummer Tim Walker. That version of ‘ Roxanne,’ book ends the set and it rocks with reggae and drop beat added into the mix, Nina once more top of the ladder vocally, and whilst Care and Walker may never quite match Summers and Copeland due to instrumental differences that doesn’t stop them trying in the slightest. There comes between much dance floor wonder and even songs to let you know there is as much concert within in their repertoire as providing a soundtrack to hoof around a polka. Twelve envelope pushing selections mark their daring do, you should do yourself a favour and investigate forthwith y’hear?