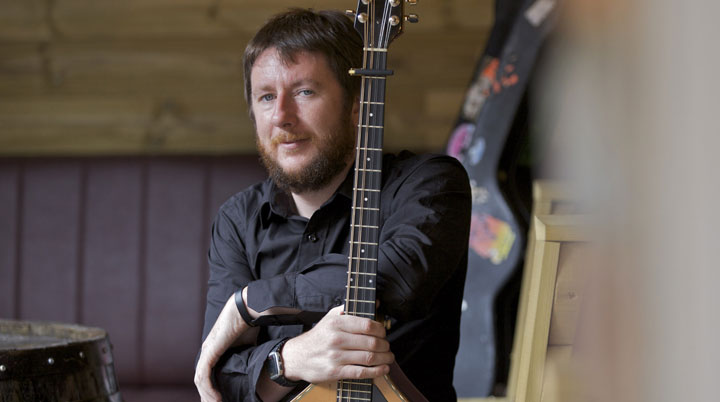 Singer and bouzouki player Daoirí (pronounced ‘Derry’) Farrell has established himself at the forefront of Irish folk music in the last two years.

A former electrician whose direction in life changed after he saw a performance of Christy Moore on Irish TV, has been attracting attention across the world since his performance at Celtic Connections in Glasgow in January 2016, while the press have repeatedly compared him to some of the biggest names in Irish music. In October 2016 he released the album True Born Irishman.

‘Farrell has created quite a buzz in Ireland…it’s easy to hear why. His powerfully unadorned vocals might be from any era, variously recalling Paul Brady and Andy Irvine…it’s a powerful statement.’ **** Mojo

The following April he won two BBC Radio 2 Folk Awards in a ceremony at London’s Royal Albert Hall. Since then Daoirí has travelled across the globe, clocking up performances at some of the biggest folk events in the world including the National Folk Festival of Australia, Cambridge Folk Festival, Vancouver Island Festival in Canada, Folk Alliance International in the USA, Tønder Festival in Denmark, Dranouter Festival in Belgium and more.

In February 2018 he toured major venues in the UK in the all-star line-up of Transatlantic Sessions.

Meanwhile Daoirí’s video performance of Creggan White Hare has to date achieved over 500,000 hits on Youtube.

Daoirí is currently recording the follow-up to True Born Irishman with Dónal Lunny producing and Manus Lunny engineering. The album is due for release in October 2018.

Catch him live if you can at one of the following venues: