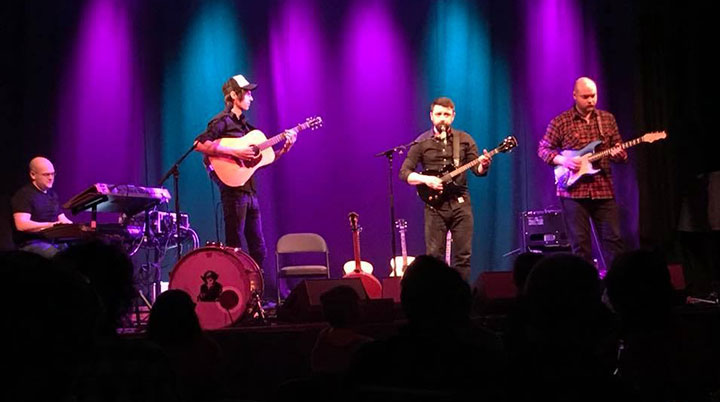 On taking to the stage at Bath’s Chapel Arts Centre Damien O’Kane immediately established himself as a genial and engaging presence. The Northern Irish singer and musician spoke warmly of the venerable Roman city while diplomatically avoiding any suggestion that he was less enamoured of Basingstoke, where he had appeared with his accomplished band the previous evening.

Somewhat boldy perhaps, O’Kane opted to commence proceedings with an instrumental, the traditional Irish melody ‘Castle Kelly’s’, drawn from recently released third album ‘Avenging and Bright’. This introductory number served as musical scene-setting since it amply showcased the lush and enveloping sound the band conjures, while O’Kane’s dexterous banjo playing occupied centre-stage. Guitarists, Steve Byrnes and Steven Iverson played impeccably throughout the night, while the keyboards of Anthony Davis added a contemporary tonal palette that sets O’Kane’s music apart from that of many of his contemporaries.

A strain of dry and eccentric humour surfaced (not for the last time) when the singer informed us that though he sits to play the banjo he will be on his feet for the guitar; the banjo being an exceptionally heavy instrument we were assured. Much of the music Damien O’Kane played tonight was evocative of a reflective, perhaps pensive frame of mind and steadily absorbed the keenly attentive audience. One striking moment was O’Kane’s sensitive rendition of ‘The Banks of the Bann’, its traditional lyrics set to a tune of the artist’s own devising. This beguiling love song set on the fringes of Northern Ireland’s longest river was a particularly apt choice given that the fabled watercourse snakes through O’Kane’s hometown of Coleraine. Before the interval was reached O’Kane managed to rouse the initially reticent audience to sing the chorus of a song taught to him by his grandfather: ‘P Stands for Paddy I Suppose’. It was however, necessary for the singer to halt proceedings mid-song to playfully lambast the audience for their timid vocals before the lines were sung back to O’Kane with heightened gusto.

Taking to the stage for the second half the show, O’Kane informed the audience that his fellow band-mates had advised him during the interval to curtail his between-song banter and concentrate on the songs. Indeed, the relaxed and gently humorous mood of the show’s first hour seemed largely supplanted during what followed by a greater sense of urgency and intent. The second set opened with a full-throttle rendering of the superb ‘Boston City’, the opening track of ‘Avenging and Bright’. Other melodious gems from the album abounded during the second set providing many examples of the tremendous musicianship of O’Kane and his band. Instrumental interludes occasionally provided instances of the impish humour evident in O’Kane’s earlier comments and observations. At one point the group detoured without warning from traditional tunes into the Muppet Show theme, complete with stonily earnest expressions worthy of Statler and Waldorf themselves. Elsewhere we were treated to a po-faced excerpt from Mungo Jerry’s, ‘In the Summertime’; a mightily incongruous inclusion in a set list of traditional music at any time but particularly so on this perishingly cold February night in Bath.

After the extended and warmly received encore it was clear that Damien O’Kane had found many supporters for his expansive vision of traditional music. Equally evident was the considerable instrumental prowess of his unassuming band. For those folk enthusiasts of the opinion that traditional music can thrive in a contemporary settings Damien Kane is most assuredly your man.