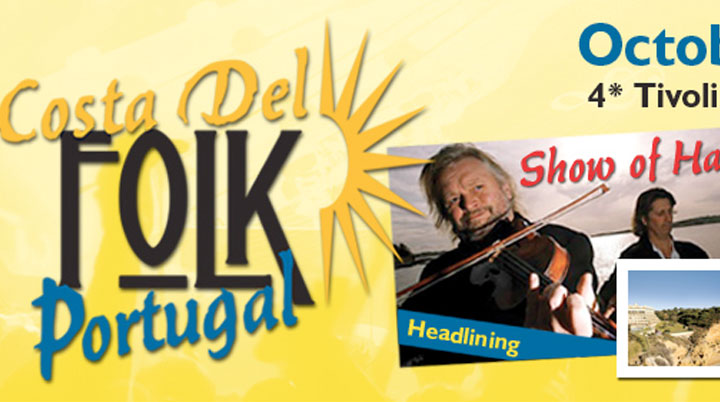 Steeleye Span’s 1975 hit ‘All Around my Hat’ opens with the line ‘Fare thee well cold winter and fare thee well cold frost’ and they were my thoughts exactly as I got on a plane this March bound for the second annual Costa Del Folk Festival in Benalmadena Spain. The event organisers at Enjoy Travel promise that this is the festival to put a smile on your face, a song in your heart and the sun on your back and as all of us who were fortunate enough to have been there last year will know, it does exactly that and more.

The warm and courteous people from Enjoy Travel were there to meet and greet us all at the airport and once our luggage and duty free items were securely on board the coach off we set in the warm sunshine for the Hotel.  Walking into the lobby of the Hotel Alay brought all of last year’s terrific memories come flooding back.  There was an excitement in the air as people checked in, collected wrist bands, greeted old friends, chatted and perused the festival programme.

The festival opened on Saturday the 14th of March and the first act to take to the Garden stage was the darlings of last year’s festival Blackbeard’s Tea Party.  Since we saw them at last year’s festival, there has been much praise heaped upon this six piece York based Band and for a very good reason.  Over the past 12 months or more this band has taken the Folk festival circuit by storm and they did not disappoint their audiences at the Costa Del Folk this year playing out the first of two blistering sets in their trademark fun and energetic style.  Their set on the garden stage concluded with three band members including Tim (who’s leg was in a brace) leaping from the stage, running through the crowd and diving straight in to the swimming pool.  There is little that will dampen down their high spirit and we wouldn’t have them any other way.

The quality of the bands and this year’s festival may have begun with Blackbeard’s but it certainly did not end there.  That same day audiences were blown away by the utter brilliance of Le Vent du Nord.  These four extremely talented multi-instrumentalists from Québec won many hearts and many new fans with their high tempo instrumentals, charismatic vocals and impressive repertoire of catchy songs both self-penned and from the tradition.  They literally had us up dancing in the isles, while a portion of the audience sat swooning in their seats (You know who you are ladies!).

Steamchicken and the Stolen Gnomes returned again this year; as good as we all remember them to have been.  The House Devils impressed everyone with their stunning instrumental performances, lively airs and mix of traditional and contemporary songs.   Coope, Boyes and Simpson were outstanding with their beautiful harmonies and poignant lyrics.  Their late night set in the Folk Club was one of many high lights at this year’s event.  Festival Headliners Steeleye Span enchanted us all on the last evening concert with songs chosen from their extensive back catalogue.  It’s very easy to see how this band has remained at the forefront of folk music over the past 45 years.    The stage in the bar area saw many great acts perform whether it was The Liam Robinson Band, The Askew sisters or Róisín Bán the talent just abounded and made for so much entertainment.  Festival stalwarts were undoubtedly ‘The Mighty Doonans,’ this band really do live up to their ‘mighty’ name.  One just never knew when you could bump into one of the Doonans, they were tremendous and they were everywhere, on the main stage, in the folk club, at the bar, in the sessions or joining another artist on stage, the Doonans were delighting us all with their singing, dancing, music, stories and good humour.

There were several individual performers at Costa Del Folk this year and to a man and woman they were, quite simply sensational.  The first of the individual performers to the stage was the musical treasure Steve Tilston.  He demonstrated some stunning guitar work as he sung his beautiful thought provoking songs. The gorgeous and talented Derbyshire Lass Lucy Ward instantly had us all charmed with her warm personable style.

The North east of England was represented in some style by Jez Lowe, Bob Fox and Billy Mitchell.  They were in sparkling form throughout the festival with some striking individual sets and a really notable performance as part the Pitman Poets.  One of the many stand-out gems of this year’s festival!  Another real treat for festival audiences was the witty and charismatic Duncan McFarlane.  This talented guitar and vocalist had a lively stage presence and whether regaling us with a story, singing a contemporary or one of his own cleverly written songs Duncan was a true delight.  Martin Simpson needs no introduction to any music fan and he was absolutely stupendous.   He was everything we have come to expect from one of the world’s leading guitarists and much more.  He treated us to two rich and powerful performances and proved quiet the raconteur during the meet and greet session, as he told us stories from his long and varied career.

As if all that wasn’t enough for Festival goers, there were many more musical delights in the form of the Duos.  The style, songwriting skills and musical range of Kathryn Roberts and Sean Lakeman was hugely impressive, extremely entertaining and a very welcome return to all fans of folk music.  Kathryn’s brother Jamie Roberts and Katriona Gilmore were equally as impressive, they were joined on stage by percussionist Tom Chapman and together they enthralled their audience with passionate, uplifting music playing with such ease and sincerity.  The wonderful O’Hooley and Tidow added their talents to the festivals glittering line up and they gave us the most beautiful songs and exquisite harmonies all delivered with the most natural and unequivocal flair.

As music fans this festival has given us so many highlights, it is very difficult to pick just one.  But, like any festival there is always an act that really gets people talking and this year that act was the young, handsome and enormously talented Greg Russell and Ciaran Algar.   If anyone required proof that they deserved the many awards and accolades they have been receiving over the past couple of years, all they needed to have done was to witness any one of their astonishing sets at Costa Del Folk.  They were a tour de force, the energy and exuberance they weaved into their performances lit up the festival for so many people.

It says a lot for a festival when most of last year’s guests returned but this time bringing their friends and families.  A festival this good is very hard to keep quiet.  Everyone was in top form, so happy to be back, meeting up with old friends, soaking up the sunshine, getting involved and enjoying every minute.

Artists, guests, the hotel and its staff all played their parts but the overwhelming success of Costa Del Folk must be given to festival organisers, Enjoy Travel, who, to a man and woman went above and beyond the call of duty to insure everyone got the most from the festival and from their holiday.  Whether you wanted an extra blanket in your room or to know where the nearest Pharmacy was located, nothing was too much to ask the team.   It wasn’t by accident that day after day everything ran like clockwork, this happened as a result of months of meticulous planning and organization.

The festival has given so many good memories to so many people, moments we shared together and no one can ever take away from us.  For me it was a real privileged to have been part of this wonderful festival.  I smile when I look back, but when I think about how we will have to do it all again, when The Costa Del Folk experiences heads to Portugal this October and to Mallorca next April, in the words of the old song “I feel as happy as those who have thousands!”