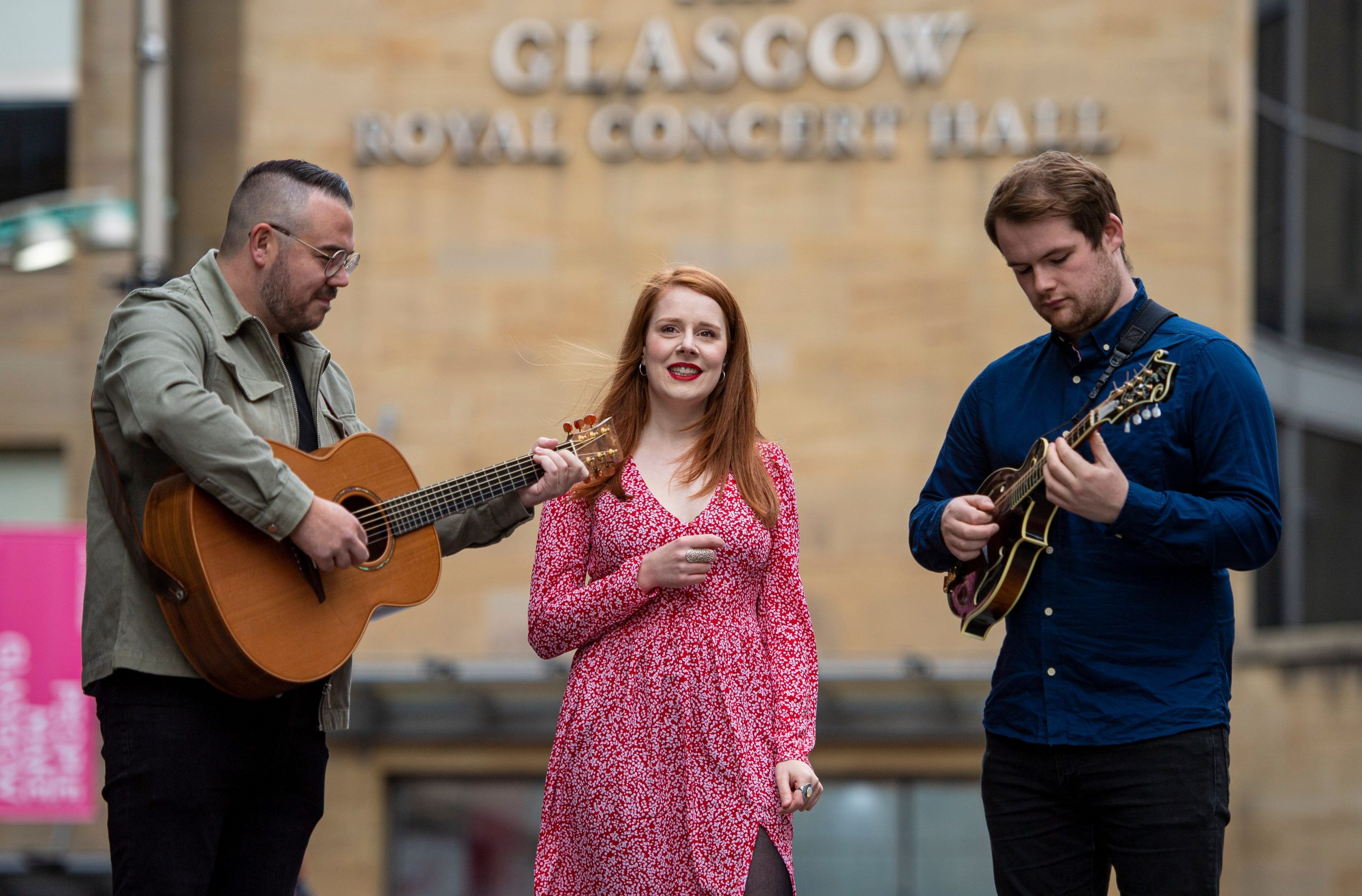 Celtic Connections, the UK’s premiere celebration of roots music, will return in full force for 2022 with an exciting and eclectic programme of events taking place in Glasgow from Thursday 20 January to Sunday 6 February 2022.

Breathing life and soul into much-loved venues across the city, the 18-day programme of events spanning traditional folk, roots, Americana, jazz, soul and world music, marks a welcome revival for the scene as more than 1,000 musicians come together once again in celebration.

Celtic Connections 2022 will be the 29th edition of the world-famous event, which made a successful transition online for 2021, entertaining more than 30,000 people in 60 countries during the darkest of Januarys.

This year, the event returns to its roots as Europe’s largest winter festival, delighting live audiences with moving performances for its loyal audiences to experience in person.

This year’s opening concert, ‘Neath the Gloamin’ Star, will be a poignant moment for many, featuring a ream of talent from a younger generation of musicians and songwriters.

The show, named after a beloved old Scots folk song, sets the scene as a celebration of a precious heritage that is now being taken forward into a new tradition.

“Celtic Connections 2022’s opening concert is a statement of the festival’s commitment to present and hold up emerging acts, recognising what is being done by young musicians in Scotland and internationally to carry the torch for Scots folk song into the future”, says Celtic Connections Creative Producer, Donald Shaw, “there’s no doubt that this year’s festival has an added significance to it, and in the context of the last couple of years, we’re eager to capture the collective human experience that is at the heart of what’s been missing for people – the sharing of experiences, songs, music and stories.

“What allows Celtic Connections as a festival to develop and stand out is the idea that as musicians and audiences, we can all share music, learn from one another and grow – and there is much to be learnt from the next generation.”

A bright light of emerging talent shines throughout the festival programme. This year’s Celtic Connections will present a Tradovation – a series of concerts from promising home-grown acts that seek to find innovation, inspiration and exploration within traditional music.

Indie fans are in for a treat this January, with some exceptional and intimate shows planned throughout the city.

Highlights include special stripped back show by The Twilight Sad at the Old Fruitmarket on Friday 21st January, while the same venue will host revered Danish trio Efterklang on Thursday 17th January.

Celtic Connections’ strong international connections and dedication to showcasing music from around the globe will continue to be at the fore in 2022 with performers from the likes of Sweden, the US, Mali and Morocco on the line-up.

Young Tennessean singer-songwriter Amythyst Kiah will also bring her unique sound, which swings from old-time roots sounds and indie/alt-rock, to Celtic Connections audiences this January. Her musical defiance has won her three Americana Music Award nominations and huge critical acclaim. Glasgow audiences able to experience her creative roll for themselves on Friday 21 January at Mitchell Theatre. Elsewhere, North American roots artists Allison Russell and Leyla McCalla, who along with Amythyst and Rhiannon Giddens, made up the collaborative project Our Native Daughters, will also present solo shows.

From The Tradition & Folk Fusion

This year the very best of traditional Irish music returns in the form of rare appearances from the likes of Frankie Gavin & Mairtín O’Connor, The Sharon Shannon Quartet, Michael McGoldrick Quintet and UAINE, featuring the flowing fiddle style of Donegal’s Brid Harper.

Fiddle virtuosos RANT will be joined by The Ledger (Gillian Frame and Findlay Napier with Mike Vass) in a special collaboration and in a nod to the 25th anniversary of the Celtic Colours festival, renowned Cape Breton band Beòlach return to the festival for a one-off show with the mighty Breabach.

Celebrated Scots-trad outfit Mànran will play the Tramway, Dallahan will take to the Mackintosh Church stage, The Chair will bring Orkney stomp to The Old Fruitmarket and the Concert Hall’s New Auditorium will play host to a fantastic night of piping titled The Conundrum: International Piping Night.

One of Scotland’s finest trad-fusion bands RURA will perform at Glasgow’s Royal Concert Hall on the last weekend of the festival alongside special guests including Duncan Chisholm, Julie Fowlis, Hannah Rarity, Michael McGoldrick and Ross Ainslie.

The BBC Radio Scotland Young Traditional Musician of the Year Final will be broadcast live from Glasgow City Halls on Sunday 6 February as the most exciting up-and-coming Scottish traditional musical talent compete for the coveted title.

For the first time in its history, Celtic Connections will work with all three of Scotland’s national orchestras on a series of spectacular evenings with a bold, unifying sound at their core.

On Saturday 29 January, Scottish folk favourites Capercaillie will be joined by the BBC Scottish Symphony Orchestra, led by Greg Lawson in a world premiere of orchestrations of the band’s illustrious back catalogue.

Finally, the Scottish Chamber Orchestra will join British Indian sitar player and composer Anoushka Shankar on Friday 28th January as she marks 50 years since her father, Ravi Shankar, wrote his genre-defining symphony for sitar and orchestra. Anoushka will perform Ravi’s Concerto No.3 in honour of the virtuoso, whose playing influenced musicians around the world.

Many musicians have acted out milestone moments in their careers at Celtic Connections and the festival is set to mark a number of musical anniversaries in style in 2022.

Among them is celebrated English folk singer-songwriter Kate Rusby, who celebrates 30 years as a touring artist at Glasgow’s Royal Concert Hall on Tuesday, 1 February. Expect achingly beautiful vocals at this heartfelt show. Also celebrating 30 years on the road are Scottish traditional music stalwarts, Old Blind Dogs, who will play a joyous return gig for fans at St Luke’s on Friday 4th February in a special collaboration with Breton band Startijenn.

It’s a 20-year anniversary for Quebecois folk quintet Le Vent du Nord who, along with special guests, will bring The Old Fruitmarket to life on Friday 28th January with their raucously unpredictable blend of guitar, fiddle, hurdy gurdy and lusty French vocals. The show, which features a dynamically modern sound, rooted in Celtic music from both Ireland and Brittany, encapsulates the festival’s cross-cultural spirit.

Songs for our planet

With the city set to host the global UN climate change conference this autumn, it’s only fitting that this Glasgow festival features several performances with an environmental message at their core. Among these will be Spell Songs – an astonishing collaboration of music, poetry, art and magic, that sees eight visionary musicians sing nature back to life.

The musical companion piece to the acclaimed words of authors Robert Macfarlane and Jackie Morris, Spell Songs is a protest at the loss of the natural world around us. Together, Karine Polwart, Julie Fowlis, Seckou Keita, Kris Drever, Kerry Andrew, Rachel Newton, Beth Porter and Jim Molyneux celebrate our natural world at The Royal Concert Hall on Thursday 27th January.

Elsewhere, celebrated composer Jim Sutherland will present When Fish Begin To Crawl – an impressionistic piece on the climate crisis, examined through the lens of his home in Caithness and Sutherland, which is home to Europe’s largest blanket peat bog.

Marking 550 years since the realisation of Shetland, some of its most well-known performers will put on a showcase and celebration of the island’s rich social and musical history.

2022 sees Wales showcased as international partners at this year’s festival, celebrating the eclectic and exciting state of the Welsh folk scene today.

Each year since 2000, Celtic Connections has partnered with a different country to create new international links and advance opportunities for their musicians.

In a nod to the UN’s upcoming decade of the indigenous languages, an abundance of emerging Welsh talent will perform, including Cynefin, Eve Goodman, Pedair, Trials of Cato, No Good Boyo and N’famady Kouyaté.

The winter festival’s tie-up with BEMIS Scotland will return for 2022 with the Celtic Connections in the Community programme. Taking the festival out to Glasgow’s culturally diverse communities, this partnership involves a series of local events and a finale performance at Tramway.

Councillor David McDonald, Chair of Glasgow Life and Depute Leader of Glasgow City Council said: “Celtic Connections return to venues in Glasgow will be the news people who love the festival will be delighted to hear. Celtic Connections has played a huge part in supporting and developing talent over the decades and is again putting together an incredible programme which will bring unique and compelling performances from around the world to live audiences in Glasgow, as they were meant to be seen and heard. Excitement is already building for what will be a Celtic Connections to enjoy and savour come January.”

Alan Morrison, Head of Music at Creative Scotland said: “It’s a delight to see Glasgow throwing open the doors to its music venues again, as Celtic Connections gets ready to rejuvenate the city with live, in-person performances. Last January’s festival was a cultural lifeline that engaged audiences all over the world, reminding us that music has an uncanny power to draw us together, even in the darkest days of lockdown. The 2022 event will be an emotional return, ranging from intimate solo shows to large-scale orchestral extravaganzas, underlining the undisputable fact that Celtic Connections truly has something for everyone.”

The festival is delighted to be sponsored by Caledonian MacBrayne, La Bonne Auberge and Holiday Inn Glasgow Theatreland. The BBC has supported Celtic Connections since its first year and the festival is pleased to collaborate once again with them for 2022.

The first shows to be unveiled as part of Celtic Connections 2022 are available to view now at www.celticconnections.com, with tickets on sale 10am Wednesday, 6 October.

Celtic Connections will have enhanced hygiene measures in place at its venues and operate in line with Government guidelines. An online element to this year’s festival is currently being explored and more shows are set to be announced.

The festival will run from Thursday 20 January to Sunday 6 February 2022. Follow the conversation at @ccfest.

For the programme line-up and to purchase tickets please go to: www.celticconnections.com