Celtic Connections 2021, the digital one… 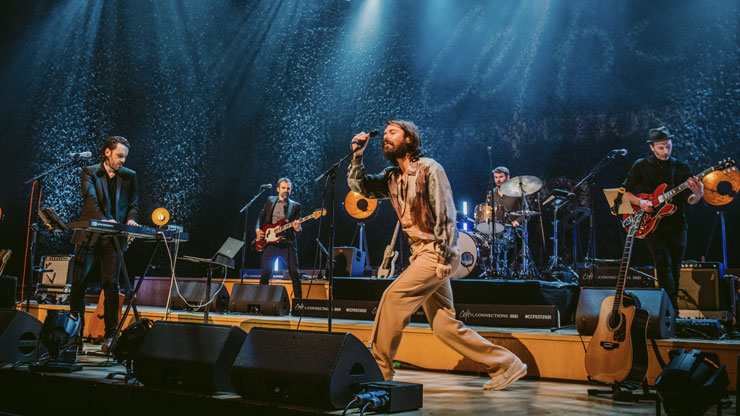 Celtic Connections 2021 has drawn to a close, and the organisers have issued this press release:

With audiences from over 60 countries and over 27,000 tickets and passes sold, the first ever digital Celtic Connections has been a huge success. Over 10.5 million minutes of musical entertainment have been enjoyed by viewers over the last 19 days.

The programme was made up of unique digital content from over 30 specially commissioned projects and performances that were filmed across many of Glasgow’s much-loved venues. Internationally artists contributed to the diverse line-up by recording performances remotely in over 10 locations, including Mali, Sudan, Nashville and Rajasthan. The closing night rounded off the 19 days of entertainment in incredible style with a special 90-minute programme celebrating some of the best moments of the festival. The Celtic Connections 2021 Farewell Concert also showed some unique moments that had not previously been aired before, including a special performance in The Hydro with Hazel Whyte from the National Youth Pipe Band of Scotland playing in the empty venue as dancers Jamiel Laurence and Katie Miller perform a choreographed sequence. This is the first performance to take place in The Hydro in almost a year. You can view and download the video here.

Over 100 musicians have taken part in Celtic Connections 2021, showcasing their art to the world. The festival created a safe space for musicians to come together to play and make music, for technical and filming crews to apply their talents and for venues to open.

The festival programme was both ambitious and diverse and delivered on a promise to promote wellbeing and optimism during these difficult times. Musician Sorren MacLean, said of being part of the Opening Night of the festival, “Honoured to be part of such a special night, playing in the band for the opening night of Celtic Connections surrounded by friends I’ve not seen or played with for almost a year! Mon the music!”

Annually the festival welcomes the world to Glasgow, but this year Celtic Connections took Glasgow to the world with audiences at home and abroad relishing the opportunity to watch such a high level of musical entertainment in the comfort of their own home. Audience member Mrs Agot Hamre from Norway wrote to the festival to say, “I have followed the online festival from day one from my home in Norway. I am impressed by the way you have managed to create a festival feeling even if we all watch and listen from a distance.” With Niamh de Búrca from Dublin writing to say, “What a great show, really enjoyed it!  Loved all the songs, singers and musicians…thanks a million! Don’t know how you managed to create an atmosphere with no audience, but you did!! Maith sibh uilig! (Well done all!)”

Celtic Connections is delivered by the charity Glasgow Life and is funded by Glasgow City Council, Creative Scotland and The Scottish Government Festivals EXPO Fund.
Donald Shaw, Creative Producer for Celtic Connections, said: “The last 19 days have instilled in us all a renewed sense of hope and optimism. Sharing our music and our culture will continue to be an essential part of our human existence and it has been incredible to be able to facilitate this, despite the challenges. The feedback we have had really shows just how important music is to people and we are delighted to have been able to help in some way brighten up the darkest January in recent history.

“As the curtain falls on this digital Celtic Connections 2021, I’d like to say such a huge thanks to so many people, to the community of musicians across the world who have gone above and beyond to provide the most incredible music, to the team behind the scenes who have made this happen and to the audiences who have tuned in and supported the festival from all across the world. A heartfelt thank you to you all.”
Councillor David McDonald, Chair of Glasgow Life and Depute Leader of Glasgow City Council said: “Celtic Connections has been a wonderful series of performances and concerts which will be remembered more for the exceptional quality of the programme and the musicians who performed and less for the challenges of the time. Night after night we were reminded about what makes Celtic Connections unique and even though we weren’t physically together to enjoy it, everyone who watched or performed or worked to deliver the festival was a crucial part of its success. That so many people around the world wanted to watch demonstrates again just how important and popular Celtic Connections is.”

Culture Secretary Fiona Hyslop said: “I congratulate Celtic Connections on the success of its first wholly digital festival. All of the musicians who have performed this year have brought joy and brightness to many through the dark winter, giving audiences the chance to enjoy the sheer talent of their music and performances.

“It is fantastic to see the online festival reach many more audiences, with viewers tuning in from 60 countries, also getting the opportunity to see iconic parts of Glasgow and the rest of Scotland in the films on show.  This digital innovation, combined with responsible remote filming, allowed for the safe international exchanges and collaborations that continue to put Celtic Connections high up on the international music festival scene.”

Alan Morrison, Head of Music at Creative Scotland said: “For the past couple of weeks so many of us have been happily immersed in Celtic Connections – making a special event of catching concerts live, dipping back into missed gigs, cheering along to personal favourites and adding new acts to the musical radar. Every artist has given their all, restoring our faith in the power of Scotland’s music. Not only that – the digital presentation has been flawless, and Celtic Connections has set the digital bar high for every other festival to follow.”

The ‘All Access’ ticket gave access to all of the concerts taking place across the 19 days. It was also possible to purchase tickets for individual shows.

The Celtic Connections Rover Membership Programme was back for 2021 and it welcomed the highest number of Rovers ever to sign up to the programme, with 634 packages sold. The Celtic Rover Digital package included access to a host of exclusive Celtic Rover extras as well as the Celtic Connections Festival pass which gave the individual access to all of the festival content over the 19 days.