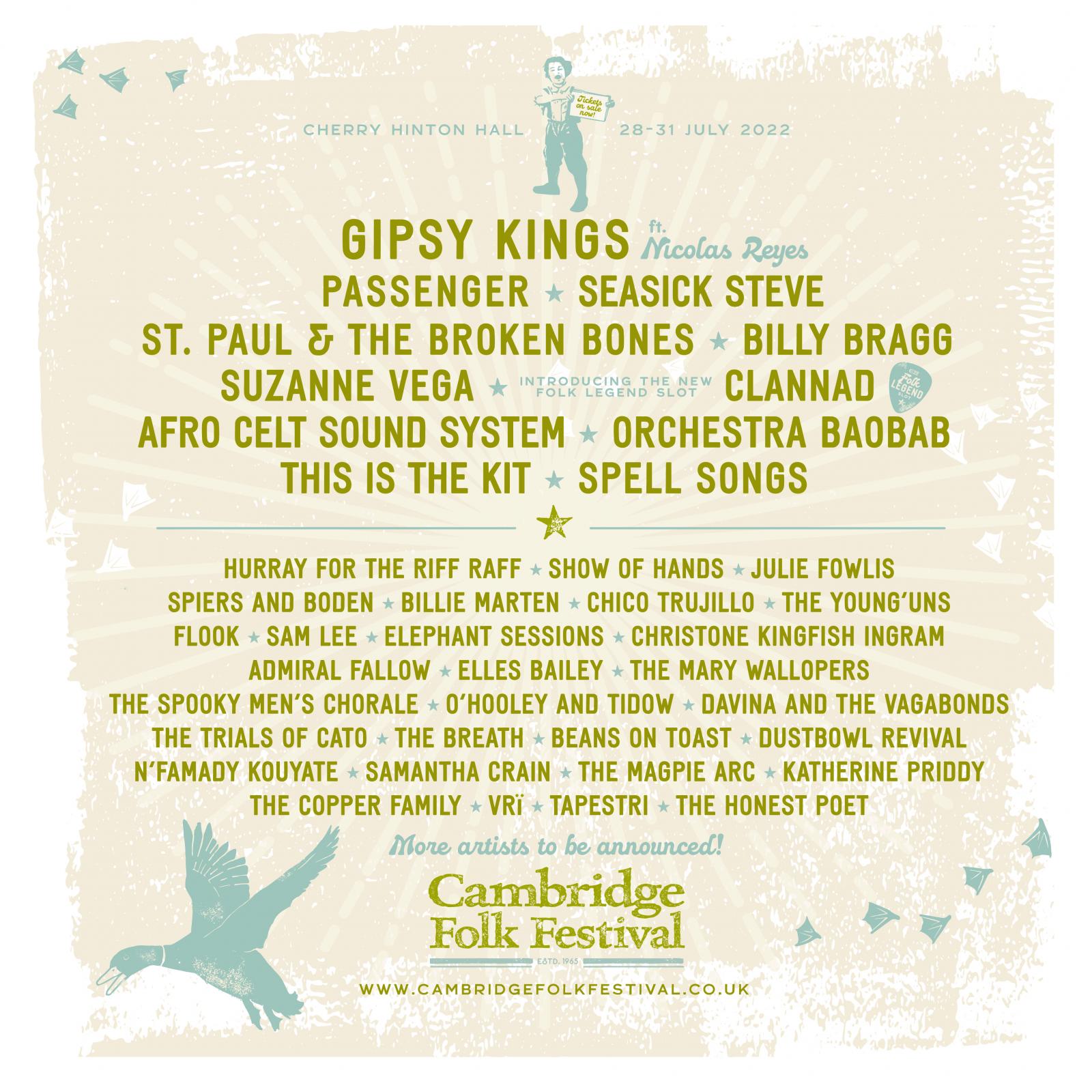 The world’s premier folk and roots festival is at last going ahead after a two year absence, yes, you got it… here comes Cambridge! As diverse and progressive as ever, the roster of artists is an eclectic blend with something to satisfy the most ardent music fan. All the action takes place at the regular Cherry Hinton site over the weekend of 28th – 31st of July 2022. And just who are those on the schedule? Everything you need to know is below….

A headline performance from the magnificent Gipsy Kings featuring Nicolas Reyes, who have dominated the World music charts for 25 years with their irresistible blend of traditional flamenco styles, Western pop and Latin rhythms. Hailing from Southern France and best-known for their enduring hit song ‘Bamboleo’, the band’s Festival line-up will feature leader and co-founder Nicolas Reyes.

A fearless recording artist, tireless live performer and peerless political campaigner for over 45 years, Billy Bragg will treat the Cambridge crowd to an acoustic set, performing songs The Guardian newspaper has described as ‘the perfect Venn diagram between the political and the personal.’

Award-winning European and African based collective Afro Celt Sound System, who have forged a reputation for energetic, uplifting shows which combine folk traditions of different cultures in a unique and innovative way.

Senegal’s Orchestra Baobab, celebrating its 50th anniversary this year. Their epic story begins in Dakar’s Medina in the late 1960s, and extends across the world into the 21st century, featuring an extraordinary group of singers and players encompassing a ground-breaking mix of Afro-Latin styles, international pop and traditional griot music.

Founded by Alynda Segarra, a Puerto Rican singer-songwriter originally from the Bronx, critics’ favourite Hurray For The Riff Raff, based in New Orleans, combining an earthy blend of roots, folk, Americana and punk to create a unique and powerful sound entirely their own.

Up and coming, young, acoustic singer-songwriter from North Yorkshire Billie Marten, whose unique style of indie-folk saw her nominated for the BBC Sound of 2016.

Multi-award-winning, inventive singer, folksong collector, conservationist and promoter of live events as founder/director of The Nest Collective, Sam Lee plays a unique role in the British music scene. A regular at the Festival, Sam returns for a highly-anticipated set in 2022.

Scottish indie folk sensations Elephant Sessions, who have taken the traditional music world by storm. Their appearances at festivals across the world have been met with crowd surfing and marquee floors breaking under the weight of bouncing fans. Cambridge get ready!

A group of versatile musicians all uniquely in demand for their skills, Scottish collective Admiral Fallow whose heartbreakingly beautiful, sonically audacious and lyrically bewitching albums have seen them become much in-demand concert performers around the world.

Big-voiced, Bristol-based singer, songwriter and band leader Elles Bailey, dubbed the “hardest-working woman in blues, rock and roots music”. Elles has won awards in both blues and Americana music and powered her way to the forefront of the British roots music scene.

Celebrating their 10th year of performing together, much loved Yorkshire folk duo O’Hooley And Tidow, whose acclaimed body of work, including the theme tune for hit TV drama ‘Gentleman Jack’ has been summed up by The Independent newspaper as “defiant, robust, northern, poetical, political folk music for the times we live in.”

Formed in Beirut, power-folk pioneers and BBC Folk Award winners The Trials Of Cato, hailed by Radio 2’s Mark Radcliffe as “one of the real discoveries on the folk circuit in recent times.”

Oklahoman singer-songwriter Samantha Crain, who has battled through debilitating illness to release new music and return to the stage, where she’ll share emotive tracks from her catalogue.

The Magpie Arc, a cross-border band from Sheffield and Edinburgh featuring the multi-award winning talents of Nancy Kerr, Martin Simpson, Tom A Wright (The Albion Band) and Alex Hunter.

The Copper Family of Rottingdean, who have been singing their songs for generations, lovingly preserving them for the future.

“After a two-year break, I’m so excited to see the Cambridge Folk Festival return to Cherry Hinton Hall,” said Cllr Anna Smith, Leader of the Council and Executive Councillor for Communities. “For many including, including me, the festival is a highlight of the summer. I’ll be booking my ticket straight away.”

You  can donate to support the Cambridge Folk Festival at Home and our artists, after covering certain costs for the Festival, which have been kept to a minimum, funds will be shared with 75% divided between this year’s artists and 25% going to Help Musicians UK.
cambridgelive.org.uk