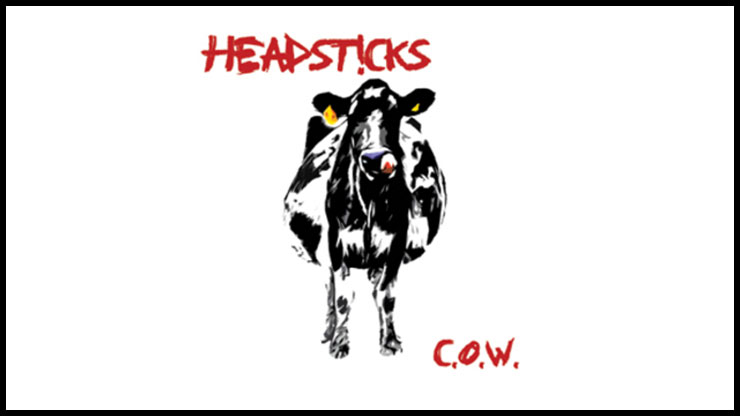 There aren’t too many bands that get asked to play punk and folk festivals, but Headsticks are one. Latest release ‘C.O.W.’ is their fourth and first on Chapter 22 records and it’s a mind and body-provoking collection of songs of “Folk, Punk, Roots, Revolution”.

First track ‘Red Is The Colour,’ features Jello Biafra-ish lead vocals from Andrew Tranter over an urgently chugging folky Motorhead riff “Red is the colour of the flowers that grow” is the refrain and unsurprisingly it’s a stern and insanely catchy questioning of the capitalist status quo. ‘Peace & Quiet’  is anything but – in feel it’s a Magazine/Ruts hybrid that warns of ecological disaster -it’s not simplistic though – it’s an attack on apathy and not doing anything about that which needs to be done.

A foot-stomping hand-clapping intro to ‘Miles and Miles’ leads into a stop-start train-beat assault of paranoia and craziness.  ‘Tears For Yesterday’ is a swirly rhythmic set of reflections “to shed a tear for yesterday….but maybe I should walk away.” The sound drops down into  acoustic instrumentation  with ‘Tyger Tyger,’ “how you’ve earned your stripes.” Like Blake, there’s awe and wonder in the world, but there’s a dark side too in the sentiments of the song; musically it’s reminiscent of early The Men They Couldn’t Hang in its use of historical iconography in a more universal context.

‘Naked’ attacks the  Emperor’s New Clothes mentality towards those in power and the sheepish attitude of those who won’t open their eyes. It’s no tin-foil hat conspiracy wet-dream though, it’s a genuine challenge to those on the left and on the right to look beyond political. Musically it’s harder edged and the chorus is a cry of repeated frustration. ‘Red Sky’  takes a funkier rhythmical approach and in this case the use of the red motif is double-edged in seen revolutionary rage, anger and disappointment – it’s typical of many songs on the album, where situations are presented in a philosophically challenging manner; no simplistic sloganeering here. ‘Burn’ is a humanist take on the will they ever learn? attitude to the effects of organised religion and hierarchical systems of belief based on worship…”just let it burn.”

The album concludes with ‘Sing Danny Boy’  –  a Mike Garryesque nightmare of domestic abuse, psychological scars and our response to them. It offers hope, but it’s forged in fire and pain. That in itself, is a good metaphor for the whole album. I read recently that there don’t seem to be any protest songs or protest singers any more. Maybe that’s because the person who penned the statement wasn’t looking in the right place. If you want intelligence, righteous anger and philosophical subtlety wrapped in three minutes of energy, then look no further than Headsticks.