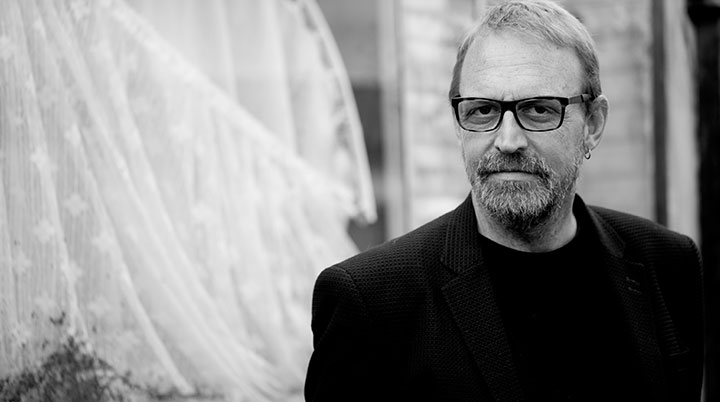 Many of you will be familiar with Boo Hewerdine as the unassuming sideman to the likes of Eddi Reader or as a solo troubadour with a dry sense of humour. To date, it’s in that latter guise that most of his solo records have paraded themselves. Well watch out; paddling up the creek he comes with ‘Swimming In Mercury’ with its widescreen and technicolour approach, backed by a full band with strings, brass and all but the kitchen sink in the mix.

Ironically, whilst this might seem like the dawning of a new age in his musical timeline, the album itself has a retrospective feel to it. ‘Satellite Town’, kicks us off with its cheesy organ intro and a feel that reminds you of the work of Squeeze’s Chris Difford, one of Hewerdine’s previous collaborators. This nod to his upbringing gets followed by another look over the shoulder with ‘A Letter To My Younger Self’ complete with brassy horns and catchy chorus. If you’re not yet convinced that retrospection pervades the record, ‘My First Band’ will seal the deal.

It’s not all personal trips down memory lane on the record and we hear of someone on the slide in ‘Drinking Alone’. Hewerdine’s astute observation of how the boozy parties of our youth can leave some wondering what happened to those carefree distant days. Loosely reminiscent of the Debbie Reynolds role in the film ‘Singin’ In The Rain’ where her character overdubs the stage singer’s voice, his song ‘Voice Behind The Curtain’ is a consideration of the world of stage performance when adoring publics may be fooled as to where the true talent shines. That latter sentiment will appeal to those readers who hate the miming and backing tapes which fill some live performances.

What comes across on the record is that he’s been gathering this pile of songs over a period of time in order to give them some special production treatment above and beyond the usual man and acoustic guitar setting. ‘American TV’ typifies the attention to detail on the production side. It starts and ends with a kitsch jingle that recalls those American adverts of the 1960’s while the song itself adds to the retro feel with its glorious chorus complete with a Beach Boys style backing.

Closing with the title track written with his son, ‘Swimming In Mercury’ is a thinly disguised tribute to David Bowie and his ilk whose approach to music caused parents to worry and the younger generation to rejoice. Though this was clearly an enjoyable shared family writing credit, I kind of wish we could get back to that juxtaposition of musical taste as it seemed to be the key to a creative well of music.

Whilst it’s been eight years since he released a full album of his own original compositions, he’s been busy on a whole range of projects (BBC Radio Ballads for the Olympics, Ballads of Child Migration, State of The Union with Brooks Williams alongside a host of other work). So, if you’ve been thirsting for a bellyful of top class songwriting, you should fall upon this release as if you’ve stumbled upon an oasis in the desert.