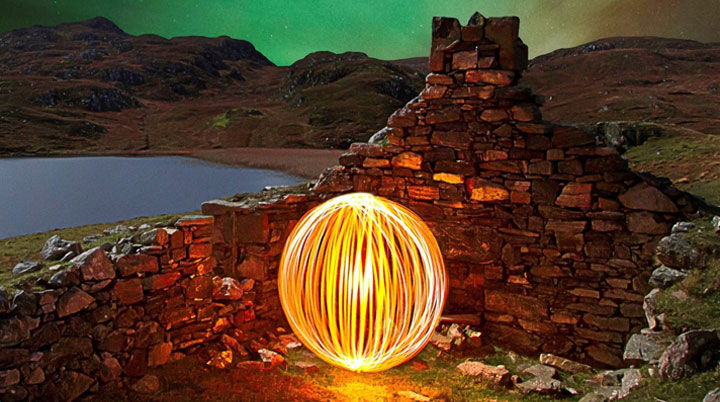 Received wisdom guides that reviews always begin with some kind of background, an explanation maybe….well, fiddlesticks to that. Put straight, you need Blackhouse, don’t read any further, it’s seven shades of brilliant! Received wisdom you see could never apply to The Peatbog Faeries.

If you’ve started this second paragraph instead of rushing out the door straight to your local music retailer, then I guess you’re one of those awkward individuals who likes a justification. So, okay… Fusion where these guys are concerned is juicy territory, intuitive roots meet dance floor/house beats with no small amount of craft and guile over the top. Their paths begin in Scots tradition the presence of fiddle, bagpipes and whistle never palls as the tracks lead them in myriad directions, sprinkling global colour and vibrancy all over the party. Whereas their previous offering Dust, opened in genteel, even ambient fashion, from the screech and howl of keyboards that herald Is This Your Son? no such repetition here, the bang is instant, pipes race like an express down- hill with no brakes. The whoosh factor is high throughout, new bowstrel Ross Couper more than earning his fee with three highly intelligent offerings, Strictly Sambuca being the highlight a pumped up, electro griddle which takes time to blip and bounce along a funk guitar line hyping the groove and low whistle echoing spookily, Couper’s fiddle brings a bag full of techno tricks to bear as he reels home in splendid fashion. Big music from a big country.

Piper Peter Morrison, chained to his writing desk no doubt, contributes the lion’s share, particularly telling is Angus and Joyce McKay a gentle, space bound tribute to his in laws which is big music in reflective, quieter mode. If trad floats your boat then Tom In The Front should be nirvana as fiddle and pipes edge one another faster and faster in a game of chase which disappears as quickly as it began in a mellow melodic mist. The safe hands of Calum Maclean, long-time collaborator, means the production on the album is wide screen throughout, capturing the Faeries at the peak of their powers as they conjure a recording which creates perfect Celtic rave.

Blackhouse is swagger and sweat, a monumental homage to home, a sumptuous cavalier shot of bravado and experiment, which has undoubtedly assured the Peatbog Faeries individualism and taken them to the borders of lands unknown. Dazzling.