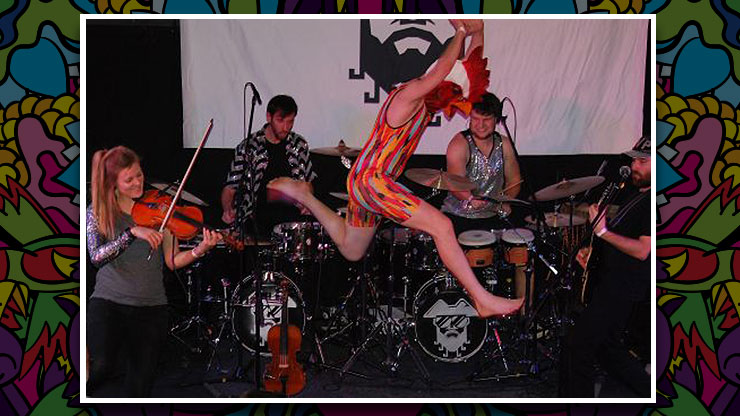 Blackbeard’s Tea Party’s bold and riotous modern, folk rock style, was built for late nights and big stages.  They give traditional songs and tunes a heavy rock edge with earth shattering riffs, playful arrangements and driving dance rhythms. This is gutsy folk rock and the six piece band has dragged itself kicking and screaming into the 21st Century,  celebrating a decade of ‘rocking the folk boat’ in 2019 and commemorating it in style with their hugely successful ‘Ten YAAR Anniversary Tour’

…. then Covid-19 was unleashed on the world and live music was plunged into a deafening silence.

But then last week,   as I was flicking through my social media pages in an all too familiar lockdown fashion,  I was confronted with a link that invited me to a TikTok dance challenge?  I couldn’t help but click on the link …..

Assuming you have done the same dear readers, you can understand why I was compelled to find out more ?

“The TikTok shanty craze completely took us by surprise, but what an exciting and positive moment it is for folk music. There’s a huge audience out there for these amazing, timeless songs, and new technology is giving us a unique opportunity to reach them. But then perhaps we shouldn’t have been surprised at all: shanties are at their core infectious, rhythmical and rousing. They have of course been ‘going viral’ for centuries. This is just a new medium. I really hope that it’s not too long until we can play a real gig again and hopefully convert some of this newfound enthusiasm for shanties into ticket sales.

We’re thrilled that The Longest Johns have benefitted from The Wellerman’s popularity. A top 40 single no less! We shared a stage with them a few years ago in Bristol and they played a stonking set of sea-shanties. I’ve read that Nathan Evans – that Scottish postie behind the original Wellerman TikTok – has signed a record deal too, so hopefully we’ll cross paths with him at a festival somewhere down the road!

We have, of course, had to jump on the bandwagon and open a TikTok account. Hopefully we can get people dancing along to our music, and Stuart has been uploading some acapella shanties. We’ve got a few quirkier ideas in the pipeline too.

Like lots of musicians, we’ve found lockdown to be a double-edged sword. On the one hand, we can’t gig, so we’re unable to do the thing we love the most. On the other we’ve had a real burst of creativity and have been writing new music with plans to record an album soon. We’ve had to approach writing in a way which is totally new to us: rather than getting together in a studio to jam and then finesse tracks, we’ve each been writing and recording individually and then using technology to stitch our parts together. It’s a revelation. We love writing like this, and we think the result could be some of our best work yet. We can’t wait to unleash new music on the world.”

Here’s the video in full for those of you keen to take up the challenge!!

I was lucky enough to see the band live before lockdown  on their Ten ‘Yaar’ Anniversary Tour and took the opportunity to find out a bit more about the band and how it all started.

How did you form and when? What was the original vision for the band?

The band formed in 2009 when we had all graduated from uni and were each wondering what to do next. We started busking in combinations of 3, 4, 5 or 6 and eventually we were offered gigs at weddings, christenings, funerals etc. Things just grew from there, and eventually we were a ‘proper’ band, putting on our own gigs and playing at festivals. I’m not sure we’d ever claim to have anything as grandiose as a ‘vision’, but we’ve already been interested in mixing together our melting pot of influences: trad folk, heavy rock, afro-cuban drumming and pop.

Have you had one line-up change?

What are your plans for the next ten yaars? Global Pandemic aside?

Who knows? In the beginning I don’t think any of us expected the band to have such longevity, and we’ve never been a bunch for lots of forward planning! We have been working on a new album and so will hopefully be able to play some new material on a tour and at festivals. We’re also interested in how we can create a more visual spectacle – making our live shows really theatrical, and creating more music videos.

Who comes up with the choreography? How are your dance moves rehearsed?

Most of the choreography starts as something entirely improvised whilst we are performing, and then later we refine and rehearse them in our practice room. We like watching other bands who use lots of movement, so we’ll often steal ideas from here and there and work them into our own set.

Is Stu classically trained? How did he develop his vocals?

No, absolutely not classically trained! I once went to see The Magic Flute by Mozart but fell asleep in the second half. I started singing unaccompanied in pub folk sessions and sing arounds and I practice in the shower.

During last year’s ‘Lockdown’,  the band started recording material for their fourth album which will be released in Autumn this year.   Due to social distancing restrictions,  it is being done remotely via Asana. Excited at the progress of the new album, they are considering working this way in the future; demoing material separately from home and then meeting up in the studio to finalise tracks.

‘Contemporary folk rock at its most infectious’ R2