One of folk ‘s most inventive line-ups is to join forces with best-selling author Raynor Winn* this summer for a tour which mines traditional songs and tunes from the West Country and new words inspired by the region.

Gigspanner Big Band is a sensational sextet led by Peter Knight whose singular and emotive fiddle playing has enriched the British music scene for more than four decades. He is joined by stand-out acoustic and electric guitarist Roger Flack, effervescent percussionist Sacha Trochet, award-winning duo Phillip Henry & Hannah Martin (Edgelarks) and John Spiers, founder member of Bellowhead, described as “one of the best melodeon players of his generation”.

Between July 8-17, the band will tour ‘Saltlines’, a brand new show described as ‘a portrait of the South West Coast Path’. Raynor Winn , an Ambassador for the Path will write brand new words to stir into the experience.


The Salt Path is Raynor Winn’s Sunday Times best-selling memoir of walking the South West Coast Path in its entirety. Her walk was an impulsive response to unexpected circumstances which left her and her husband, Moth, homeless. Along with its sequel The Wild Silence, it has sold over a million copies worldwide. They have won global praise for their ‘against all odds’ uplifting message, and their frank exploration of the reality of homelessness.

It is the way of written words, be they songs or stories, to get handed down from person to person. In this story, a copy of The Salt Path was given by FolkEast Director, Rebecca Marshall-Potter to Deborah Knight, agent and manager of The Gigspanner Big Band.

Whilst walking a stretch of the South West Coast Path, thinking of Raynor and Moth’s story, it occurred to Deborah that such a well-trodden path must hold many more stories of loss, love and the natural world. Perhaps these stories could be found in the form of traditional songs and tunes that have been left behind and saved for us due to the diligence of song collectors such as Cecil Sharp (1859 to 1924) co-founder of the English Folk Dance & Song Society.

Her hunch was correct, and research has thrown up a multitude of songs from this beautiful geographical location. It has proved to be a rich seam of songs to be mined.

‘An astonishing narrative of two people dragging themselves from the depths of despair along some of the most dramatic landscapes in the country, looking for a solution to their problems and ultimately finding themselves’. ―Independent

This seed of an idea developed into an exciting collaboration between Raynor Winn and The Gigspanner Big Band, and work began  to develop a show based on those traditional songs, and Raynor’s words…words which, in her role as Ambassador of the path, she wrote especially for the project. Together, Raynor and the Gigspanner Big Band celebrate “630 uninterrupted miles of coastline, crossing wild headlands with the calls of oystercatchers, and the smell of salt laden air ever present” (Raynor Winn)

Saltlines is having its debut tour in venues around the South West Path in July of 2022. Following the route almost in its entirety, the tour of the South West Coast Path will start in Taunton, and finish in Poole. 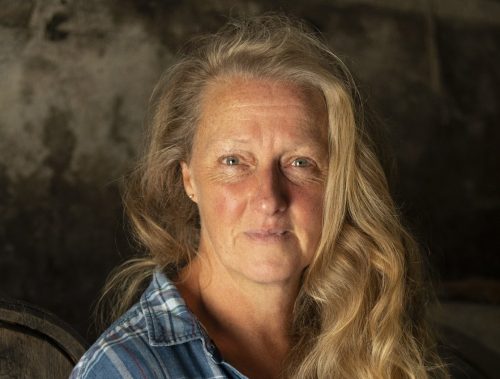 Raynor Winn is a long-distance walker and writer; her first book The Salt Path was a Sunday Times bestseller in 2018.

Winn and her husband Moth, who was diagnosed with a terminal illness called corticobasal degeneration, became homeless after a bad investment, and decided to walk the 630-mile South West Coast Path.

The Salt Path was shortlisted for the 2018 Wainwright Prize, and the 2018 Costa Book Awards in the biography category. The judges described it as “An absolutely brilliant story that needs to be told about the human capacity to endure and keep putting one foot in front of another.”

In May 2019 The Salt Path won the inaugural RSL Christopher Bland Prize. In September 2019 it was the number one bestselling book in UK independent bookstores.