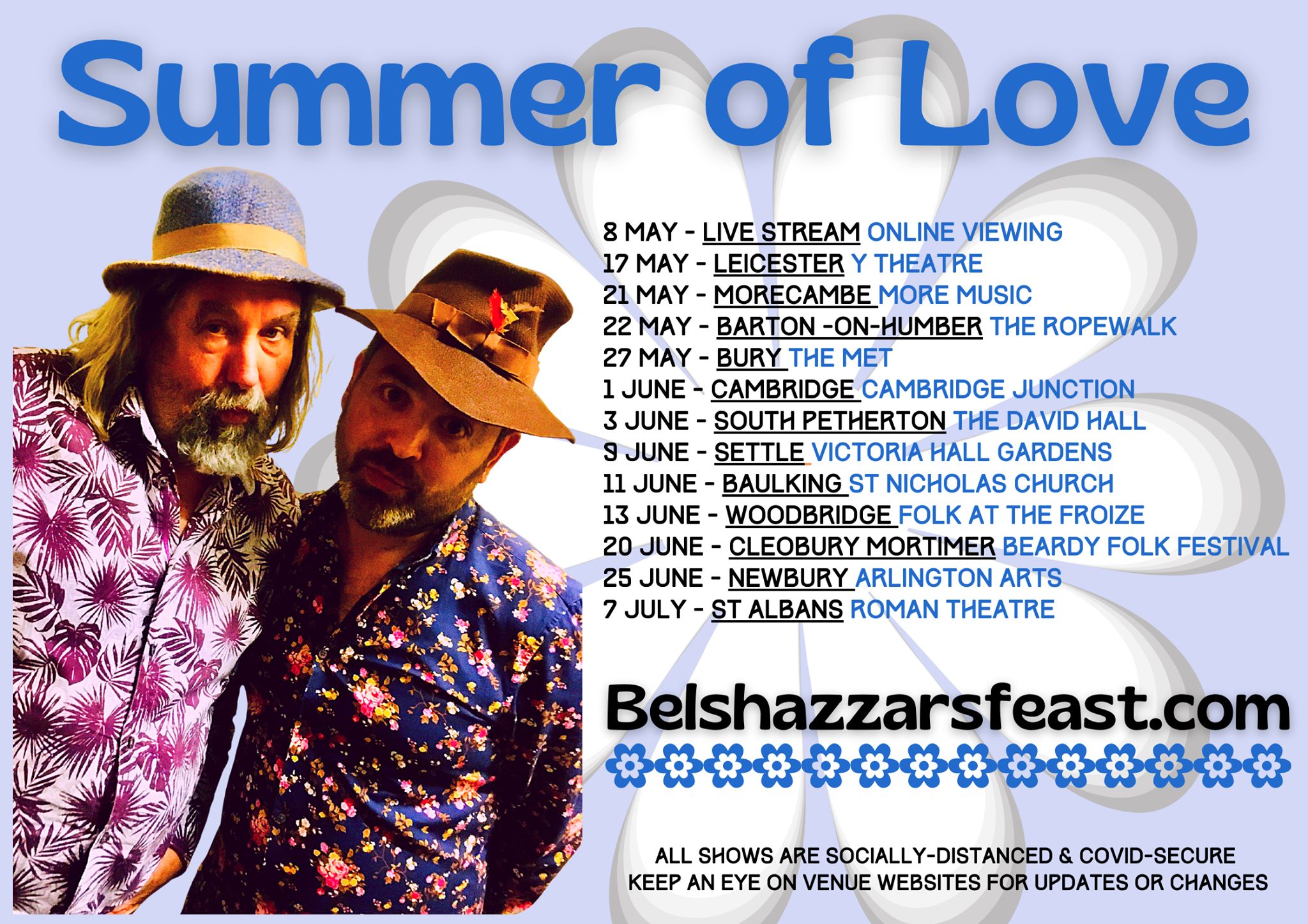 FEASTIE BOYS ARE BACK ON THE MAP! ….with new music and real concerts at venues and festivals from 17th May, when the roadmap will allow it. Some are indoor and some outside. At some venues they’re doing two concerts so that the audience can be well spaced out – yes two in one night !!
Having met in the mid nineties, Paul and Paul formed a duo and began working for ceilidhs and social dances. Their other early recordings were song and tune sets and they toured America and Belgium, mostly playing for social dances. Working with caller Andrew Shaw on a project exploring the work of the 18th century composer Nathaniel Kynaston, they went on to release Mr Kynaston’s Famous Dance volume 1 (2000) and volume 2 (2002). Another album drawn from the social dance repertoire, John Playford’s Secret Ball, followed in 2001.
Belshazzar’s Feast have released nine critically acclaimed albums across their long career. Their first winter-themed album, Frost Bites (2009), earned them a nomination for Best Duo at the BBC Radio 2 Folk Awards. In celebration of twenty years of working together, 2014 saw the release of The Whiting’s On The Wall.
‘One of the most intimate and entertaining live albums I’ve heard.’ – Songlines
Regularly appearing on regional and national radio stations and folk shows, recent appearances include broadcasts on Radio Canberra (pictured below), BBC Radio 2 with Chris Evans and with Claire Balding, and on BBC Radio 3 In Tune. The duo also work together with charity organisations, and in hospitals and care homes. They were the support band for Bellowhead’s tour of the UK in 2009.  As they put together a new album and a scrapbook-style book, the duo are reflecting on their 25 years plus of performing together, and looking ahead to being able to go the road to share the new material with fans.
So as you try and contain your excitement .. here are the options for you to experience their unique musical talents on their Summer of Love 2021 Tour before decrepitude and arthritis kicks in !!   Here you go …..
They are offering an ONLINE OPTION – Before they go on the road, they’ll be streaming a live gig to your home this coming Saturday 8th May at 7.30pm. to  suit those of who live at a distance from the live shows, and those preferring to watch from the comfort of their own home
Click here for Livestream online-only gig: https://www.wiltshiremusic.org.uk/…/livestream…
WHAT TO EXPECT AT LIVE GIGS – This is new for everyone so they have set out  some practicalities of what to expect. Each concert has been properly planned with everyone’s safety and comfort in mind.
CONCERT LISTING – (WITH COVID SECURE DETAILS)
Mon 17 May | Y Theatre, Leicester | 8.00pm
The seating will be set out to ensure you’ll be socially-distanced and full Government guidelines for social distancing will be followed, hospitality and cleaning procedures before and between performances.
Fri 21 May | More Music, Morecambe | shows at 6.30pm and 9.00pm
The seating is set out to ensure full Government guidelines for social distancing are followed, hospitality and cleaning procedures before and between performances.
Sat 22 May | The Ropewalk, Barton-on-Humber | shows at 6.30pm and 9.00pm
Will open again in May with a few socially distanced events before the relaxation of restrictions in June. These events have a limited capacity so book early to avoid disappointment.
Thurs 27 May | The Met, Bury | shows at 6.30pm and 9.00pm
Tickets are available for socially distanced tables (maximum four people per table).
Smaller parties can purchase individual seats in the balcony. Some balcony seats have been removed to allow you to sit in socially distanced groups.
Tues 1 June | Cambridge Junction | shows at 6.30pm and 9.00pm
Safety for audiences will be a number one priority.. This show will be fully seated with seats laid out in accordance with group sizes. There will be a 1m gap between groups. You must attend only with members of your household or support bubble.
Thurs 3 June | The David Hall, South Petherton | shows at 6.30pm and 9.00pm
Social Distancing Events with a maximum of 48 seats per Show.  Only book for a maximum of six people from two households. Doors open for show 1 at 6pm and show ends at 7.45pm. There will be hall cleaning before doors open at 8.30pm for show 2.
Wed 9 June | Victoria Hall, Settle | 7.30pm
This concert is outdoors in the lovely garden at the hall.
Fri 11 June | St. Nicholas Church, Baulking | shows at 6.30pm and 9.00pm
These will be socially distanced shows, with 30 tickets available for each.
Sun 13 June | Fol at the Froize, Woodbridge | 7.30pm
This concert is in an outdoor marquee with social distanced seating at The Froize Freehouse Restaurant
Sun 20 June | Beardy Folk Festival, Cleobury Mortimer | Afternoon
This concert is part of the weekend-long festival and will be on an outdoor stage. Day tickets available as well as weekend tickets.
Fri 25 June | Arlington Arts, Newbury | 8pm
Indoor show with socially distancing, and maximum capacity at just under 50% of the auditorium.
Tues 6 July | Frome Festival | 7.30pm
Indoor show. Details to follow.
Wed 7 July | Roman Theatre Open Air Festival, St. Albans | 7.30pm
This performance will be outdoors at the site of the Roman Theatre, as part of a festival season of events. Tickets available for just this show.
from the Maltings Theatre
TICKETS – http://www.belshazzarsfeast.com/gigs/