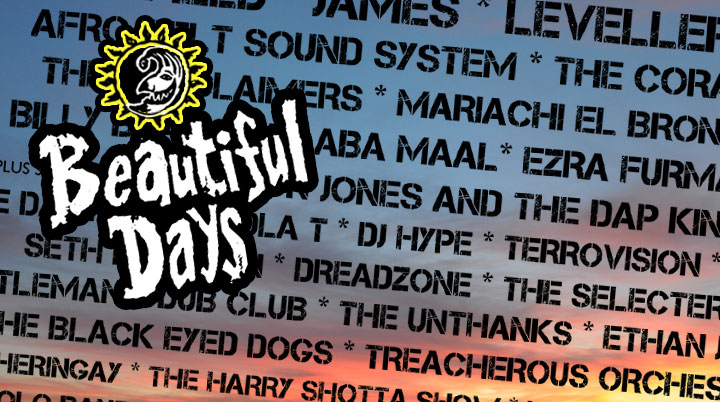 Headlining Beautiful Days 19 – 21 AUGUST 2016 on the Friday night are Leftfield – one of Britain’s most influential electronic dance acts. Their debut Leftism, remains one of the defining statements of 90s dance music. Headlining on Saturday night we welcome back Manchester legends James who release their fourteenth new studio album ‘Girl at the End of the World’ this month. Sunday night headliners are festival founders Levellers who will close the weekend with a spectacular show including a firework finale. Joining them on the Main Stage bill are Simon Emmerson’s Afro Celt Sound System who release their first album in 10 years ‘The Source’ in April, plus Mercury Prize nominated folk-rock band The Coral, Charlie & Craig Reid aka The Proclaimers, plus Mariachi El Bronx – the mariachi side project of Los Angeles hardcore punk band The Bronx, dub/ska band Gentleman’s Dub Club and West Country rockers Reef. We also welcome very special guests, American Grammy nominated funk/soul band Sharon Jones and the Dap Kings, plus the brilliant and exciting solo artist Ezra Furman, festival favourites Dreadzone, rock band Terrovision, punk legends The Damned and The Selecter led by their iconic frontwoman Pauline Black. The Main Stage bill also features Hollie Cook, Lanterns on the Lake, UK Feds, Flight Brigade and The Church.

The THEME FOR 2016 IS STARS……..sparkling cosmic related attire or simply star-shaped accessories. The focus of the day on the Sunday will be stars, with site art and other elements of the festival reflecting the theme.