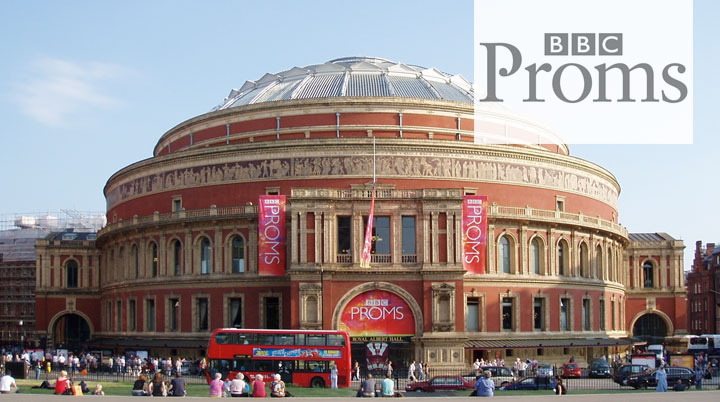 120 years since the very first Proms season and in the spirit if its founding mission to make the best music available to everyone, the 2015 Proms will reach millions of music lovers beyond the concert hall, whenever and wherever they are, via BBC Radio, Television and Online.

The world’s largest broadcast classical music festival, every Prom is broadcast live on BBC Radio 3 and in HD Sound online. This year, BBC Radio 1, Radio 1Xtra, Radio 2, Radio 4, Radio 6 Music and the Asian Network will all broadcast Proms, and on BBC Television selected Proms performances will be broadcast on BBC One, BBC Two and BBC Four in HD and surround sound. This year, CBBC will also broadcast a Prom. All Proms recorded for Radio and Television will be available on-demand for 30 days after broadcast on BBC iPlayer via the BBC Proms website, bbc.co.uk/proms, including additional performances from across the season.

Also in 2015, all Proms from the Royal Albert Hall will be available to listen online in surround sound.

As the home of the BBC Proms and classical music, BBC Radio 3 will broadcast every Prom live from the Royal Albert Hall and Cadogan Hall. Each Prom will be available on-demand for 30 days in HD Sound via the Proms website, and each week five concerts will be repeated on Afternoon on 3 and the Proms Chamber Music concerts will be repeated on Sundays at 1.00pm. Throughout the Proms season, Radio 3 also provides extensive context around the festival’s concerts and accompanying events at the Royal College of Music in a wide range of Proms-related programming.

A series of Late Night Proms curated in collaboration with five of the BBC’s national radio stations – which along with the BBC Proms are part of BBC Music – will showcase a coming-together of musical genres: Radio 1’s dance ambassador Pete Tong celebrates 20 years of Radio 1 broadcasting and hosting live events from Europe’s dance music capital Ibiza, joining forces with the Metropole Orchestra to reimagine some of the most enduring dance music tracks in the history of the genre (Prom 16); BBC Radio 1Xtra presents a grime symphony with artists including Wretch 32, Stormzy and Krept & Konan (Prom 37); Jarvis Cocker leads a BBC Radio 4 Prom based on his popular Wireless Nights series (Prom 74); BBC Radio 6 Music’s Mary Anne Hobbs presents a reimagining of classical music by pianist Nils Frahm and due A Winged Victory for the Sullen (Prom 27); and the BBC Asian Network brings a new wave of contemporary Asian and Bollywood artists collaborating with the BBC Philharmonic (Prom 8).

In 2015, the Proms will also reach international radio audiences through BBC World Service broadcasts of selected Proms and the festival will be broadcast in up to 50 territories via the European Broadcasting Union.

Proms on Television and Online

Selected Proms are broadcast on BBC One, BBC Two, BBC Four, CBBC and online via the Proms website throughout the 2015 season.

BBC Four will present a curated series of Proms broadcasts on Thursday, Friday and Sunday evenings throughout the festival: Thursday Proms will focus on soloists in both concerto and recital repertoire presented by Samira Ahmed, Tom Service and Kirsty Wark; Friday Proms will offer hot tickets to some of the absolute highlight Proms of the season with presenters including Angel Blue, Clemency Burton-Hill, Razia Iqbal, Suzy Klein and Petroc Trelawny; and Sunday Proms will focus on the symphony, with leading British conductor Sir Mark Elder introducing a different symphony each week and presenter Katie Derham hosting from the Royal Albert Hall.

Viewers will be able to watch performances of all the works from any Prom filmed for TV, available for 30 days on BBC iPlayer via the Proms website, bbc.co.uk/proms.

Expanding on the growing audience for digital content which last year saw 56% of all unique browsers coming from mobile and tablet, this year more Proms content will be available online than ever before across PC, mobile and tablet. All music performed during filmed Proms and not broadcast on television will be available to watch on special online BBC iPlayer collections via the BBC Proms website, bbc.co.uk/proms. See television broadcast below for more information.

The new Proms website, bbc.co.uk/proms, is the digital home of the Proms with everything audiences need to know about the 2015 BBC Proms season, including on-demand listening, highlights videos and an online Proms Archive detailing every Proms concert since they began in 1895. A brand-new BBC Proms Guide app provides a digital version of the printed Proms Guide, available for mobile and tablet devices on iOS and Android, and BBC Playlister will also provide recommendations of works from the season in its playlists and audiences can tag any piece of music performed at the 2015 Proms and it to their own playlist. In 2015 all Proms from the Royal Albert Hall will also be available online in surround sound. For more information about the Proms 2015 digital offering go to bbc.co.uk/proms.