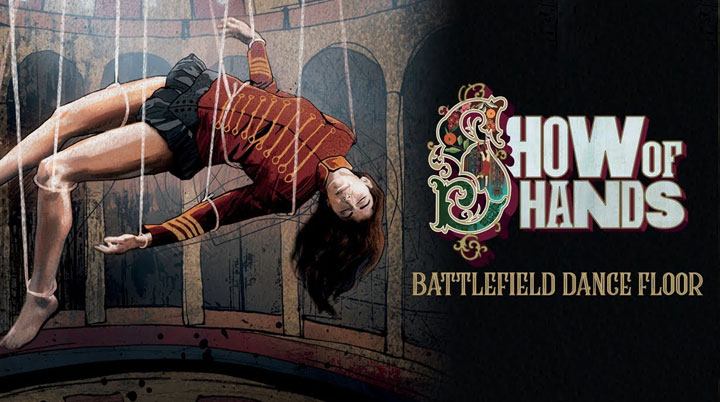 It’s been three years since their last release but fans of Show of Hands need wait no longer as ‘Battlefield Dance Floor’ has made its appearance. With thirteen tracks to ponder, the album has the core duo of Steve Knightley and Phil Beer augmented by the almost ever present, Miranda Sykes, as well as Cormac Byrne adding percussion. Respected producer Mark Tucker assists in that role as does Gerry Driver who also plays a variety of instruments, and long-standing friend Matt Clifford is around to add keyboards too.

Amongst the thirteen tracks, there are eight new songs from the pen of Steve Knightley plus a co-write with master dohl drummer, Johnny Kalsi. These, alongside the covers that make up the album, are most notable for their variety. That’s not to say that their music has been in some sort of musical straightjacket as their fans will know. It’s more a case that the music on this record is explicit in offering up some very distinctive approaches.

Take, for example, the aforementioned co-write, ‘Mother Tongue’ and its story of displacement where the climax of the song is reached in the Asian vocal of Shahid Khan. Then, juxtapose this with the ‘Cornish Reggae’ on the slang titled ‘Dreckley’ where the local lad beseeches the return of his estranged love. In one swoop, we’ve moved from a far eastern mother tongue to a west country tongue in cheek.

Of course, there are some songs that have the more obvious Knightley stamp on them. Outstanding amongst these is the love song ‘Just Enough To Lose’ which starts with the wonderful lines, “It was just between the sowing and the reaping, that you told me our crop would fail”. Adorned with some keyboard that Matt Clifford recorded whilst on tour with The Rolling Stones, it’s destined to be a stage favourite for Show Of Hands.

Amongst the covers included here is a Richard Shindell song that has already become a stage favourite with Phil Beer taking the lead vocal on ‘Next Best Western’. Adding to the rich mix in approach is a cover of Leonard Cohen’s take on the cold war, ‘First We Take Manhattan’ alongside Kirsty Merryn’s tale of Grace Darling and her father, ‘Forfarshire’, where Knightley and Sykes duet. Less well known but also fast becoming part of their live act is ‘My True Love’ written by friend of the band, Adrian Mannering of Dublin.

With Steve Knightley now an Honorary Rifleman of the 6 Rifles Infantry Battalion (check out the military beat of ‘Swift and Bold’ on this record), it could be interpreted that the variety on this record is a commercial shot at a wider audience. However, Knightley and Beer have always drawn widely from musical influences – indeed, that’s part of their strong appeal. Instead, ‘Battlefield Dance Floor’ should be seen as a record where Show of Hands’ masterful approach has brought together many of their influences with resounding success.