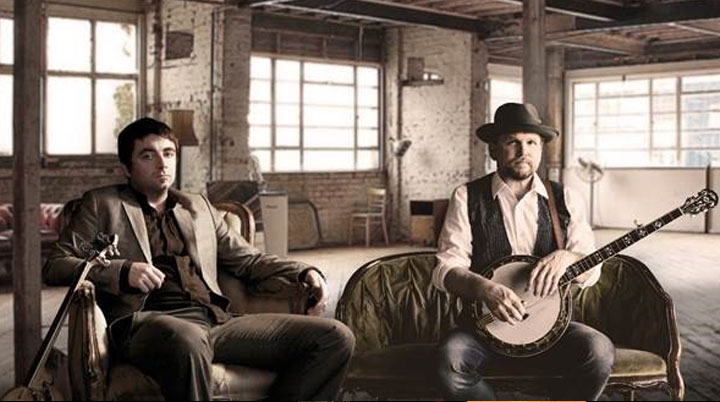 You know that point when you are listening to someone play a banjo as part of their set or album and you wish it would go on longer? Our prayers have been answered by the über talented Damien O’Kane & Ron Block, devotees and masters of the Irish tenor banjo and American bluegrass banjo respectively.

Damien O’Kane will be no stranger to our readers, his two recent albums are masterful and innovative and you should have them in your collection. If you haven’t heard of Ron Block then hang your head in shame as he has 14 Grammy Awards and 6 International Bluegrass Awards on his mantlepiece. It’s a big mantle, he’s American.

Block kicks the album off with Miller’s Gin, inspired by an evening sat listening to a miller’s tales (no really). He makes the banjo emote in ways I’ve not heard, when O’Kane kicks in you realise what a brilliant pairing this is.

I love the down to earth cues that inspire the most delightfully inviting compositions. Digging potatoes on O’Kane’s allotment results in Potato Anxiety. A love of his family is the root of at least five of the tracks Damien has written, all of which put a smile on your face – yes, even the Ode To Aunty Frances, an elegy to his aunt who passed in 2017, the warmth of that love comes through in every note. His mum always seems to get a nod in his songwriting, this time the track is Crafty Colette. Initially I thought this time maybe he’s dishing some dirt on his mother, but the ‘crafty’ bit is about hand crafting cards and gifts. Perhaps next time we’ll get the full story of her double life as a super spy. This talented man is making playing banjos and growing spuds cool.

Of course it’s not just these two on the album, you also get some of their super talented friends on fiddle, mandolin, double bass, flute, guitar and keyboards. But it is always those banjos leaping and soaring through the tunes that keep the energy and pace cracking along. They have invented the title Banjophony to describe their sound. I would have called it simply gob-smacking, but I guess that Banjophony is a better title for an album.

On a serious note, the banjo seems to have been the subject of numerous jokes over the years, but no more. It is time for banjo players to unite and shoulder their way to the front. Get those guitarists and accordion players off their pedestals. Anyway, to start to redress the balance, heard the one that goes “what’s the definition of a gentleman? A bloke who knows how to play an accordion, but doesn’t”.

Phew, got through that without mentioning ‘duelling banjos’. Bugger.