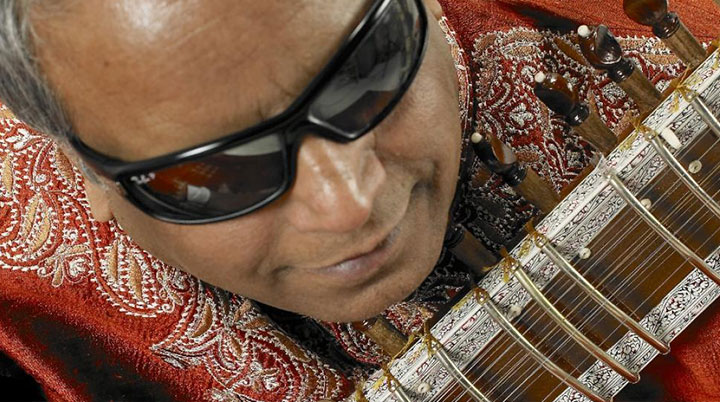 Some heartening news amidst all of the intolerance, greed and aggression that seems to be the norm in the world at the moment; Baluji Shrivastav is to be honoured with an OBE for services to music at Buckingham Palace. Baluji is the Director and founder of the London charity Baluji Music Foundation (BMF) and The Inner Vision Orchestra.

BMF is a London-based charity which recognises and supports blind musicians. The charity particularly welcomes the participation of disabled people in music, and has thus founded the Inner Vision Orchestra of blind and visually impaired musicians. Baluji Music Foundation promotes the understanding and enjoyment of music and performing arts from the Indian Sub-Continent in all its traditional and evolving form.

Baluji’s journey from his homeland of Uttar Pradesh to Buckingham Palace, has been hard-won, overcoming blindness from 8 months of age, he fought against the odds to become a multi-instrumentalist and sitar player to the stars. Baluji continues to perform and record with some of the world’s greatest tabla accompanists such as Anindo Chatterji and Ustad Fayaz Khan as well as recording albums with Stevie Wonder, Massive Attack, Annie Lennox, Noel Gallagher and Madness. In 2012 Baluji performed at the Closing Ceremony of the Paralympic Games alongside the British Paraorchestra and Coldplay.

Baluji’s new album ‘Best of Baluji Shrivastav’ is being released worldwide through ARC Music on Feb 24th and is followed by an official album launch at London’s RichMix on Sunday 26th February. at 18:00.