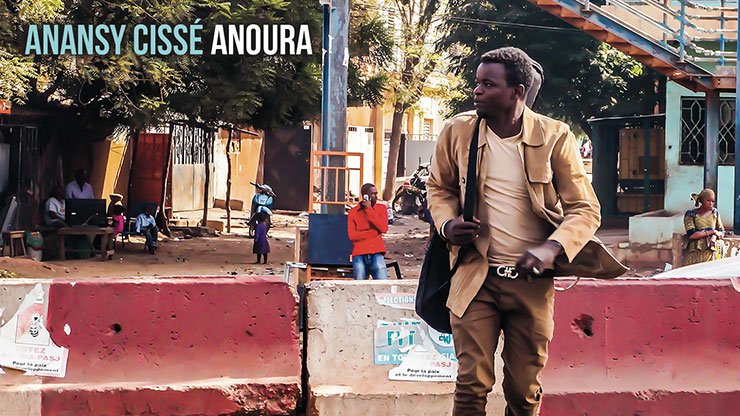 World Music, as defined a few years back, has taken a change in direction as the internet has made music from around the globe readily available to all. Sometimes, distinct musical genres get blurred into what gets described as ‘fusion music’ – a terrible terminology. It fails to recognise the subtle difference between musicians who create their music having been influenced as opposed to inspired by the music of others. There is no question that ‘Anoura’ by Anansy Cissé is a work of inspiration with its prime influence coming from the desert blues music of West Africa.

The story of Anansy Cissé and the recording of this new album is a dramatic one. Its predecessor, ‘Mali Overdrive’ arrived in 2014 but in the intervening years there have been considerable ups and downs. Ironically, on the way to appear with his band at a 2018 Malian peace and reconciliation festival, they were attacked by an armed group, beaten up and their instruments broken. The incident drove him away from performing live to work in his studio and record various local artists. It was the birth of his first child that pushed him to develop some of his own recordings from 2017 and the result is the ‘Anoura’ album release of 2021.

It’s hard to imagine how one would feel in a world turned upside down like Mali but its impact on Anansy Cissé was to turn him lyrically from political perspectives to the social elements of day-to-day family life. Sung completely in the Songhai language, the album starts of with the swirling ‘Tiawo’ which recognises the importance of children having access to education. Its traditional acoustic style recalls West African blues masters such Ali Farka Touré or Boubacar Traoré but the electric guitar solo that punctuates the song comes straight out of the world of rock. This approach is typical of what you find across the record with tradition overlaid with modern styles. ‘Foussa Foussa’ sings of the old traditions that children follow and their deep meaning while an electric guitar fuzz swings into dub echo that any reggae producer would feel proud to have captured. Traditional African musicians are found sat alongside modern styles in a comfortable way. No more so than when the late Zoumana Tereta sits in for the tracks ‘Balkissa’ and ‘Talka’ playing the (single string fiddle) soku that pervades West Africa’s Wassoulou music.

While the label behind this release, World Music Network, is known for compilations that draw upon a variety of musical themes, you’ll find this record on their new music imprint, Riverboat Records. Well done to them for supporting this music. ‘Anoura’ by Anansy Cissé is a triumph in that old and new musical genres mix in an inspired way that creates a fresh sound.