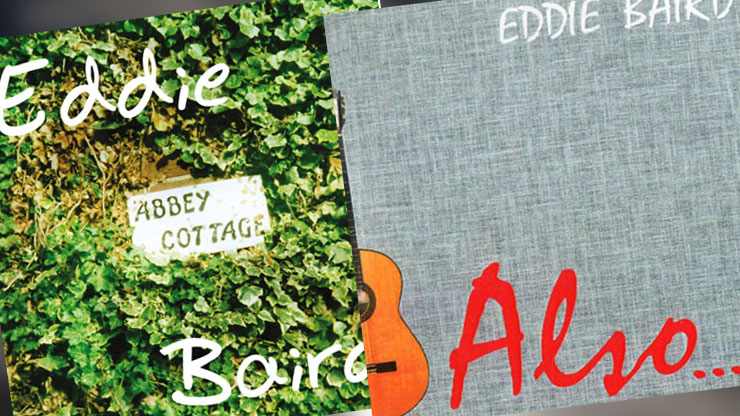 From the archives of Lincolnshire guitarist Eddie Baird comes a two fer reissue on Manchester’s worthy Epona label. You may know his name from The Amazing Blondel, if you’ve the original Island LPs where they dressed as dandies, revealing a music rooted in centuries long since past with appropriately florid lyrics. Eddie was one third of that crew, who by the time John Gladwin had left were down to Eddie and Terry Wincott and it was the writings of Mr. Baird who steered a balance between the olde roots and a newer electric drive. Check ‘Blondel,’ from 1973 to hear the results, it’s enticing.

Launching a solo career that’s going still between occasional Blondel reunions, saw him issue albums across the 80s and 90s in small numbers, each one pushing his writing into new directions.

‘Also,’ is essentially the easiest to listen to as it leaves a picture of acoustic writing of  high quality, often quieter and softer compositions which betray emotions and atmospheres through carefully chosen lyrics that speak of life and love in many guises. The instrumental passages show his ability with the wood and the wire as well.

‘Abbey Cottage,’ is essentially Blondel in everything but name, former band mate Wincott produces and plays most of the instruments. The funky ‘Runaway,’ shifts through some juicy riffing and Eddie’s vocal has never sounded better. Wincott brings the strings and arrangements which adorned tracks like ‘Mulgrave Street,’ back in the day and what’s more he does it with sympathy knowing exactly what his friend’s music needs. Even when he tries pushing things with jazz and Spanish influences Baird is equal to the challenge making an album which’ll warm you and bring a smile to your face.