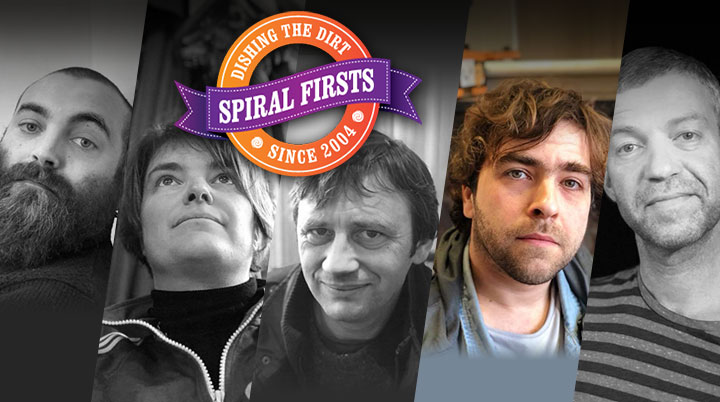 James Delarre is the Yang to Andy Cuttings Yin, a balance to the cosmic power of folk music. Where Andy is quiet and introspective James is bouncing about all over the shop. This veritable Folk Tigger is an accomplished violinist and has appeared with Eliza Carthy, Jim Causley, Jim Moray, Lauren McCormick, Mawkin:Causley and of course is an integral part of Mawkin. His energy runs through everything he does, but it is always underpinned with the strongest grip on just what the rules are, which allows him to rip up the rulebook. He finds new perspectives on the tradition and what kind of direction it can take. He is also notable for elbowing his way into film and TV shows, whenever a folk band is needed in shot he’s there like a shot. You’ll have seen him on Peaky Blinders, Far From The Madding Crowd and My Cousin Rachel, in period costume and face authentically grubby.

Here are Mr Delarre’s Firsts, from which all I’m taking is his loathing of dried fruit and an unhealthy obsession with Andy Cutting…

FIRST RECORD YOU EVER BOUGHT
I’m not sure, really can’t remember, probably something very uncool.
(Rubbish cop-out, so I’m saying it was ‘The Wombling Song’. Ed)

FIRST PERSON WHO MADE YOU WANT TO BE A MUSICIAN
Johnny Cunningham made me want to play fiddle music, I didn’t make the decision to become a musician it just kind of happened by mistake.

FIRST GIG YOU EVER SAW
I think a Martin Carthy gig with my parents at a folk club in Chelmsford, but the first gig I went to by myself was Lamb.

FIRST PERSON YOU FELL IN LOVE WITH
Um..

FIRST THING YOU THINK ABOUT IN THE MORNING
Err…
(We’ll leave it there. Ed)

FIRST PERSON YOU’D INVITE TO A PARTY
My son Rowan. He loves a party. He is 2.

FIRST THING YOU’LL BUY WHEN YOU MAKE YOUR FIRST MILLION
My first million?? We are talking folk music right?!

FIRST THING YOU’LL ABOLISH WHEN YOU RULE THE WORLD
Dried fruit in baked goods. Raisins in scones and sultanas in spotted dick and cake can do one.

FIRST ALBUM YOU’D SAVE IF YOUR HOUSE WENT UP IN FLAMES
Why would I need to save an album, it’s all digital now isn’t it? I guess I’d save some Topette to sell on tour in April and May.
(Well, it’s more of a philosophical question than that, but if you’re being pedantic… Ed)

FIRST PERSON YOU’D SEND ON A ONE-WAY TICKET TO THE HEART OF THE SUN
There’s a couple I can’t mention publicly and the heart of the sun is too good for them.

FIRST THING YOU EVER PERFORMED IN PUBLIC
I played some Cotswold tune with Bampton Morris aged 7 at the request of Simon Care, I’ve seen the photos, but I can’t remember it.

FIRST SONG YOU’D HAVE PLAYED AT YOUR FUNERAL..
The polkas by Topette, that’d wake everyone up!

FIRST INSTRUMENT YOU EVER OWNED
A half size violin, although I’m pretty sure I borrowed it from my parents.

FIRST PLACE YOU’D VISIT IN A TIME MACHINE
2015 – I’d really like a go on a flying skateboard.

FIRST TRACK ON YOUR IMAGINARY ALBUM OF YOUR OWN GREATEST HITS
SPOTS Tail – Topette!!

FIRST THING YOU’D LIKE TO CHANGE ABOUT YOURSELF
My Andy Cutting Obsession.
(Yeah, it’s a bit creepy. Ed)

FIRST ARTIST YOU’D BOOK TO APPEAR AT YOUR OWN UNLIMITED BUDGET FESTIVAL
Topette!! – what better band to party to!
(Pay them  £5 million and answer the ‘First thing you’ll buy when you make your first million’ question above. Ed)