A Question of Firsts – Paul Sartin 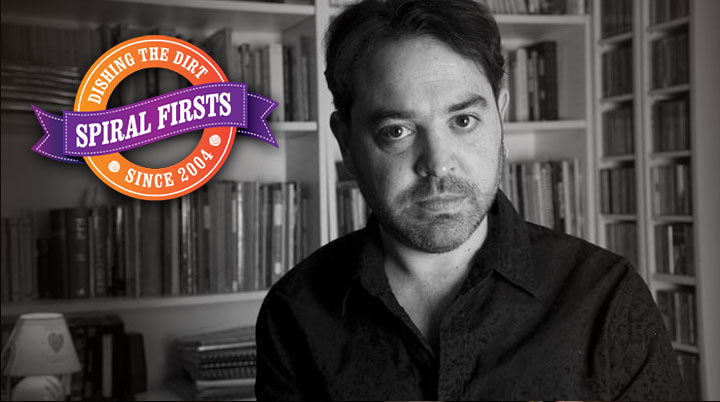 Paul Sartin is a prolific musical marvel, he is the the brains behind Faustus, the brawn behind Bellowhead and the beauty at the heart of Belshazzar’s Feast. A man for whom the very idea of only having one pot on the boil is a sign of weakness. Rumour has it that he travels everywhere with piano, violin, oboe, assorted wind instruments, mobile classroom, spoons and claghorn just in case another project proffers itself to him. We managed to break into his strict schedule of rehearsal and performance to spill the proverbial beans on his list of firsts…

FIRST RECORD YOU EVER BOUGHT
Was meant to be Shakin’ Stevens ‘Green Door’, but I lost my nerve at the last minute.

FIRST PERSON WHO MADE YOU WANT TO BE A MUSICIAN
My mum. Probably because she wanted me to get a proper job.

FIRST GIG YOU EVER SAW
Yehudi Menuhin at the Albert Hall.

FIRST PERSON YOU FELL IN LOVE WITH
Someone who is still a dear friend. And Linda Carter in ‘Wonder Woman’.

FIRST THING YOU THINK ABOUT IN THE MORNING
Tea, of course!

FIRST THING YOU’LL BUY WHEN YOU MAKE YOUR FIRST MILLION
Some new socks.

FIRST THING YOU’LL ABOLISH WHEN YOU RULE THE WORLD
The word ‘like’.

FIRST ALBUM YOU’D SAVE IF YOUR HOUSE WENT UP IN FLAMES
Jethro Tull’s ‘Songs from the Wood’.
(Yes! But what about Heavy Horses and Stormwatch? Ed)

FIRST PERSON YOU’D SEND ON A ONE-WAY TICKET TO THE HEART OF THE SUN
Too many Tories to mention.

FIRST THING YOU EVER PERFORMED IN PUBLIC
‘You’ve Got to Pick a Pocket or Two’ from ‘Oliver’, at a house party, when I was 7.

FIRST SONG YOU’D HAVE PLAYED AT YOUR FUNERAL..
‘If I Was a Blackbird’. Traditional song, Whitchurch version.

FIRST INSTRUMENT YOU EVER OWNED
Howarth’s oboe. Still got it and playing it.

FIRST PERSON YOU’D RAISE FROM THE DEAD
John Smith, former Labour leader. Things would have been so different…

FIRST TRACK ON YOUR APPLE MUSIC OR SPOTIFY MOST PLAYED LIST
‘Slaves’ by Faustus. Purely for work purposes.

FIRST TRACK ON YOUR IMAGINARY ALBUM OF YOUR OWN GREATEST HITS
‘I Would this War Were Ended’ from latest Faustus EP.

FIRST THING YOU’D LIKE TO CHANGE ABOUT YOURSELF
Personality.