A Question of Firsts – Ninebarrow 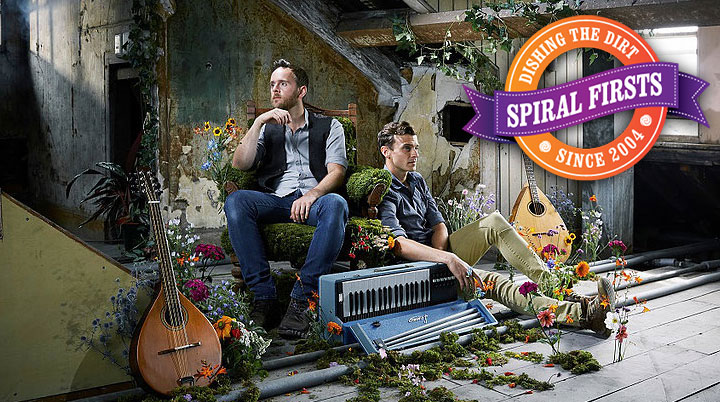 So the story is that this duo named themselves after Nine Barrow Down in the Purbeck hills. I can in fact confirm that this is tosh, as you will see from the pic above the duo are afflicted by a rare condition called autocompostitis. This rural condition results in swathes of wild flowers, grasses and that sort of thing flourishing wherever you plonk your arse. The boys need nine barrows to cart away the excesses of natures bounty that spring up everywhere they go.

This is also the reason they had to give up real jobs as a teacher and GP to become folkies. The school and surgery got sick of the relentless hayfever. Luckily the lads really are rather good at the folkie thing so it all worked out well, plus festivals and folk clubs welcome their inherent natural abundance.

Here are their combined firsts, the ‘truly monumental’ Ninebarrow (according to Mike Harding)…

FIRST PERSON WHO MADE YOU WANT TO BE A MUSICIAN
Jay: Bjork
Jon: Damien Rice

FIRST THING YOU THINK ABOUT IN THE MORNING
Jay: Brexit (its a disease)
Jon: Where’s my phone (also a disease)

FIRST PERSON YOU’D INVITE TO A PARTY
Jay: my Mum – she brings the fun
Jon: I hate parties.

FIRST THING YOU’LL BUY WHEN YOU MAKE YOUR FIRST MILLION
Jay and Jon: a house on the Dorset coast.

FIRST ALBUM YOU’D SAVE IF YOUR HOUSE WENT UP IN FLAMES
Jay: Homogenic, Bjork
Jon: sorry – I’ll be saving the instruments

FIRST PERSON YOU’D SEND ON A ONE-WAY TICKET TO THE HEART OF THE SUN
Jay: Boris Johnson
Jon: Trump

FIRST THING YOU EVER PERFORMED IN PUBLIC
Jay: recorder recital at first school
Jon: some kind of trumpet thing at middle school

FIRST SONG YOU’D HAVE PLAYED AT YOUR FUNERAL..
Jay: All is full of love – Bjork
Jon: Bobby McFerrin – Don’t Worry, Be Happy

FIRST PERSON YOU’D RAISE FROM THE DEAD
This generated long discussion and we both came down on the ‘let sleeping dogs lie’ side of the fence. Jay said if he could, he’d bring his granny back, but she’d probably be pissed off and let us know it!

FIRST PLACE YOU’D VISIT IN A TIME MACHINE
Jon: Dorset, AD 43 when the Romans invaded
Jay: Back to the time before mobile phones and the internet.

FIRST TRACK ON YOUR APPLE MUSIC OR SPOTIFY MOST PLAYED LIST
We don’t know how to so that!
(Seriously? you were a teacher and a GP before you became full-time musicians. What hope is there for future generations? Ed)

FIRST TRACK ON YOUR IMAGINARY ALBUM OF YOUR OWN GREATEST HITS
Jay: The Weeds
Jon: Prickle-eye Bush

FIRST THING YOU’D LIKE TO CHANGE ABOUT YOURSELF
Jon: I’d like wavier hair
Jay: A permanent tan
(Sending a tanning booth and home perm kit your way. Ed)