A Question of Firsts – Ben Walker 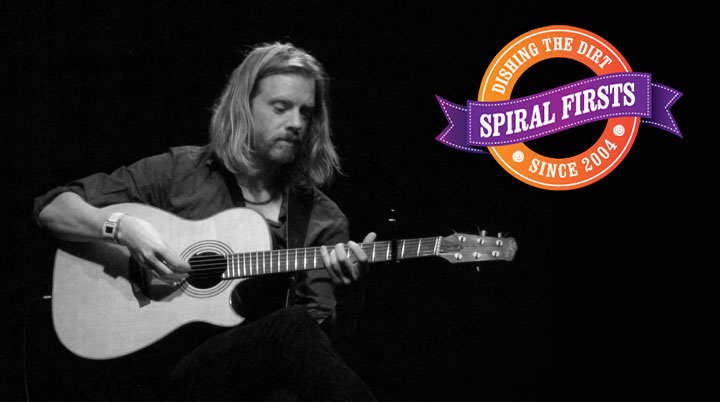 He is one of ‘the best acoustic guitarists in the world right now’ according to Total Guitar magazine. So I was surprised, whilst doing my forensic research for this intro, that Fatea has described him as ‘obscene’. Digging a bit deeper whilst putting my glasses on, it became clear that they actually said ‘almost obscenely good’. Shame they didn’t see fit to go the whole hog and ditch the ‘almost’. Mind you, my spellcheck insists on changing ‘fatea’ to ‘fatwa’. It also changes Spiral Earth to ‘spinal tap’, I’m thinking some fatea insurgents have sabotaged my computer.

FIRST RECORD YOU EVER BOUGHT
Paula Abdul, Forever Your Girl. I was 7, and the music video for one of the songs had a cartoon cat in it…

FIRST PERSON WHO MADE YOU WANT TO BE A MUSICIAN
My mate Todd in primary school. He started having guitar lessons and I thought it was cool so signed up. He now plays for the rather awesome Lydian Collective.

FIRST GIG YOU EVER SAW
My Dad took me to see Gordon Giltrap at our local arts centre in Evesham, which kind of sums up a lot of where I’ve ended up musically. The next proper gig would have been at Uni: And You Will Know Us By The Trail Of Dead supported by a very early Snow Patrol(!)

FIRST PERSON YOU FELL IN LOVE WITH
Couldn’t possibly remember or comment!!

FIRST THING YOU THINK ABOUT IN THE MORNING
Tea.

FIRST PERSON YOU’D INVITE TO A PARTY
S Club 7. Because there ain’t no party like an S Club party.

FIRST THING YOU’LL BUY WHEN YOU MAKE YOUR FIRST MILLION
A Moog One. It’s a synth, it goes beeeooooooooooowwwww. Or another guitar, because there’s always room for one more, right?

FIRST THING YOU’LL ABOLISH WHEN YOU RULE THE WORLD
Unequal pay in the workplace.

FIRST ALBUM YOU’D SAVE IF YOUR HOUSE WENT UP IN FLAMES
Music Has The Right To Children, by Boards of Canada

FIRST PERSON YOU’D SEND ON A ONE-WAY TICKET TO THE HEART OF THE SUN
Um. Too many to choose from but probably Piers Morgan.

FIRST THING YOU EVER PERFORMED IN PUBLIC
Heartsong by Gordon Giltrap. I hated doing it. Everyone else was into Green Day and Rage Against The Machine at the time, so some nerdy kid playing strummy guitar was never going to be cool. And now I’m a folk musician, so that showed them.

FIRST INSTRUMENT YOU EVER OWNED
A brown primary school-era plastic recorder. After that, an Argos special full-size Spanish guitar. My parents threatened to sell it if I didn’t practice.

FIRST PERSON YOU’D RAISE FROM THE DEAD
Elvis. Why not…

FIRST PLACE YOU’D VISIT IN A TIME MACHINE
The UFO Club around ’66-’67.

FIRST TRACK ON YOUR IMAGINARY ALBUM OF YOUR OWN GREATEST HITS
Afon, the opening track off the my hotly anticipated forthcoming album Echo (on sale from July 5th) laugh

FIRST THING YOU’D LIKE TO CHANGE ABOUT YOURSELF
Longer fingers, shorter feet.