A Pocket Full Of Acorns – Ninebarrow 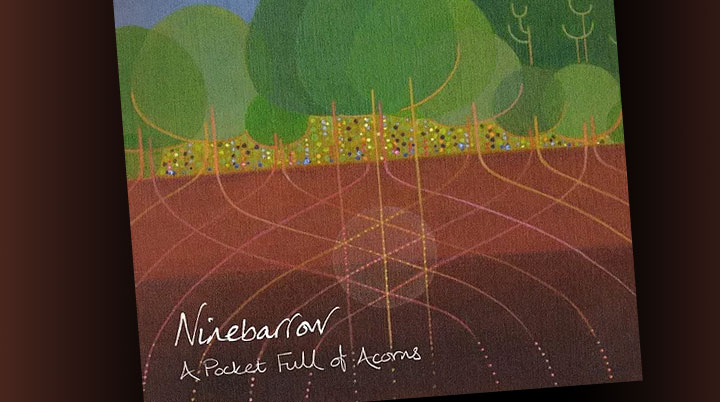 The new album from Jon Whitley and Jay LaBouchardiere marks an interesting stage in their journey as Ninebarrow. The enforced isolation of lockdown has encouraged self reflection for many of us, whether by purpose or not. Jon and Jay had a stark realisation of the carbon footprint that their touring was responsible for – a realisation aided by a nerdy determination to work it all out with spreadsheets!

Rather than acknowledging the fact and moving solemnly on, they planted 1,000 trees in a field in Dorset. As a reparation to the land that they love it is a wise and touching move, for these guys, that is totally in character.

So A Pocket Full Of Acorns really sounds like an album born of reflection and introspection, the acorn of the title song tying neatly into their own nascent woodland. It comes from the story of Vice-Admiral Cuthbert Collingwood, Lord Nelson’s second-in-command at the Battle of Trafalgar, who carried acorns in his pocket to plant when out walking. His aim was to ensure wood for the warships of future generations. He knew that the oak was a finite resource, even though the seeds he planted wouldn’t be mature until he was long gone, yet he knew it was important to do so. For the duo, “The story really touched us. The notion of using one’s time on earth to help secure a future for those who come after us seems to have been lost in modern times.”

Their signature harmonies cast a net around the listener, gently lulling you into their world. As a reflection of the world we are living in right now it is pretty spot on, a sense of melancholy infuses the album, a sense of being caught in a liminal state between worlds. Don’t get me wrong, melancholy is delicious when it is done well, and Ninebarrow do it just right.

In this barren time for live gigs, the album has taken on a new significance. We are almost bound to listen to it alone, whether at home or accompanied through headphones on a walk. An intimate companion in bleak times – A Pocket Full Of Acorns is perfectly timed and beautifully formed.