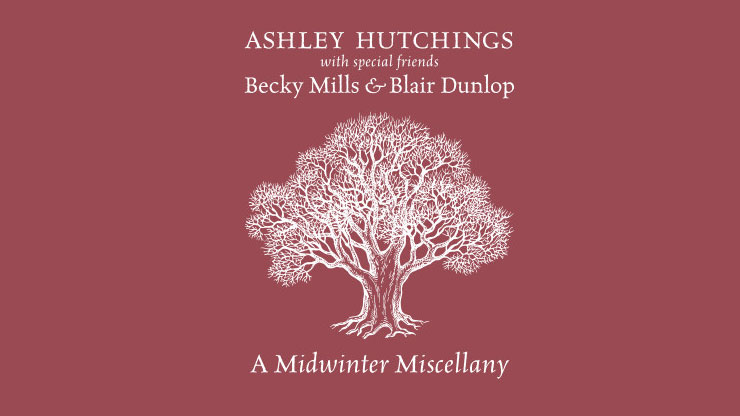 December usually means a month on the road for the Father of folk rock, with the one continuation of the brand Albion, this year though like most other artists he’s seen cancelled gigs and had to stay at home. For a creative sort that’s really hard to take, so reading the signs early, the decision was taken to turn his house into a studio and to fill the touring gap with an album which represented what his audience might well have experienced if all had been well.

To aid him Ashley turned to his son, Blair Dunlop and good friend, singer songwriter (ex Waking The Witch) Becky Mills. Both have equal billing on the CD cover and indeed a goodly slice of performance, in addition Blair produces for the first time making a rather fine job of it too. “It was a little unnerving producing family,” he admitted when I spoke to him,” but I really feel that I managed to capture the atmospherics that a winter themed record needs.”

A second cousin once removed of Horslips ‘Drive The Cold Winter Away,’ the focus of the CD is wider than just Christmas and takes a long look at the frozen months of the year through the prism of music, poetry and literature. Those familiar with Mr. Hutchings will know that he sprinkles his albums with readings and folklore, here he adapts liberally from George Elliot to G.K.Chesterton, some selections set to music by Blair and Becky.

Mills in particular deserves mention for her ‘Sweet November,’ a lyric redolent with images and reflection as autumn turns to winter and the wind whistles colder. Blair Dunlop’s skills as a writer shine on ‘Christmas Wreath,’ which is also available as a remix, it begins softly a gentle guitar line and seasonal lyric before his deliciously understated electric lead line chimes like a clarion bell delivering the ringing closure.

“ It was a pleasure to be involved in an album which was low key in construction yet has such an impact,” considers Becky Mills summing up exactly what ‘Miscellany,’ delivers with ease; the feeling of long nights, warm hearth and snug comfort. No doubt exactly what Ashley Hutchings had in mind anyway. Seasons greetings all round.