A Lancashire Grace – The Oldham Tinkers 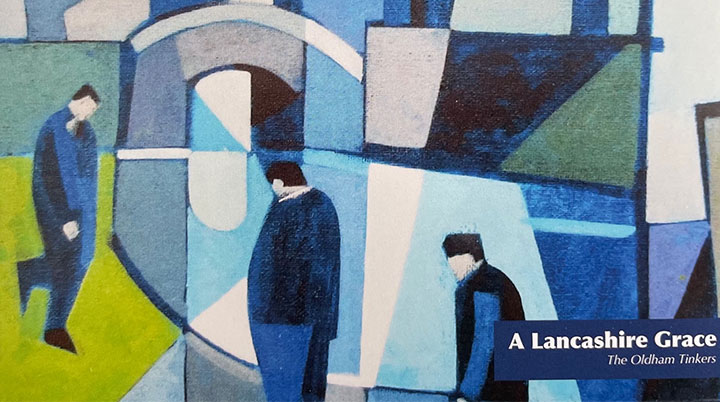 Well, it’s taken a while, but The Oldham Tinkers have come up with a follow up to their last record, ‘That Lancashire Band’ released in 1979. Of course, there’s been re-release and compilation albums in between but this is the first set of new recordings to appear. Much has changed in the world over those years but ‘A Lancashire Grace’ finds The Oldham Tinkers still playing to their bountiful strengths.

It would be easy to write off The Oldham Tinkers as a regional curiosity but that would be a superficial viewpoint. Rooted in Lancashire they may be, yet their approach varies sufficiently to allow them to appeal more widely. When seen live, their most obvious trait is the comedy appeal which you’ll find to the fore with the likes of ‘Mossley Corporation Pop’ on the new record. The latter track being composed by Gerry Kearns, a founding member of The Oldham Tinkers, who also contributes vocals, guitar and more compositions to the album. John Howarth, another founding member, is ever present as a supreme spoken word storyteller who adds other vocals, banjo, concertina and whistle too. Vocals and mandolin as well as recording duties fall to Dave Howard.

Kearns’ songs vary lyrically but often contain socio-political comment that reflects the issues of today as much as those of the past. For example, ‘Peace Be Upon You’ (or ‘As-salamu Alaykum’, its alternative title) reminds us that many of us are immigrants. The Tinkers themselves being first generation Irish. A fact that partly explains their use of traditional Irish melodies on some songs. Most obviously on ‘A Mountain To Mourn’ which tells the tale of a quarry near Oldham that has been designated a site of special scientific interest.

Such storytelling is commonplace amongst the tracks with pertinent reminders of history such as ‘Remember Annie Kenney’ in celebration of her contribution to the suffragette movement. Kenney hailed from Oldham, the area that’s been an inspiration for The Tinkers since their inception and provided rich pickings in so many ways. You’ll find they draw from local artists whether borrowing poems from Harvey Kershaw as on the spoken word title track or the artwork from Peter Stanaway that is used on the album cover.

So, Abba aren’t the only act to wait 40 years to release new music into the world in 2021. The Oldham Tinkers offer up ‘A Lancashire Grace’. Even though it’s doubtful that they are going to appear ‘live’ in virtual reality form like their Swedish counterparts, there’s no doubting that ‘A Lancashire Grace’ is a collection that comes with the typical wit and wisdom of The Oldham Tinkers.