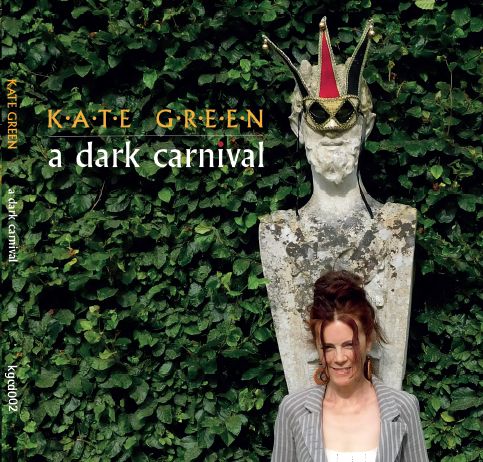 The musicians credited on the back of ‘A Dark Carnival,’ alone should indicate that Kate Green is moving in the right circles to bring her more attention. You don’t mix with the likes of Jed Grimes and Michael Doonan ( both ex Hedgehog Pie,) without having merit and others roped in to flesh out her repertoire are no slouches either. This has been a while brewing, having been begun at the studio of the esteemed Jon Loomes in Ripponden and polished in Soundstation, Wakefield. All of which should tell you Kate is a South Yorkshire lass and is possessed of a cracking voice as well as serious intention.

She’s got eclectic taste ranging from Memphis Minnie to that well known Trad Arr, via her own songs several of which hold potential and the best of which by some way is ‘Maddy’s Leaving,’ that talks about women who turn their circumstances around finding empowerment from within. For such a serious subject it’s jolly and melodic. There’s also a tasty reading of Lal Waterson’s ‘Fine Horseman,’ the kind of song that makes you stop the car, pull over and listen attentively.

Where the real deal comes though is in two tracks which mix acoustic and electric instruments on a couple of old ballads – ‘Lady Diamond’ and ‘Shallow Brown,’- which begin quietly and lull you into a cosy atmosphere before performing sharp turn around and ramp up the volume with guitar, drums and bass all taking matters home in fine style. The album’s worth the price of this pair alone. They sends shivers down your spine and signpost what she needs to do next. That put simply is folk rock. She’s got the voice for it and in Jed Grimes, Raymond Greenoaken and sundry others, musicians with the capability to produce something really tasty. Cross fingers and here’s hoping. Meantime this is where the promise begins and is worth hearing.