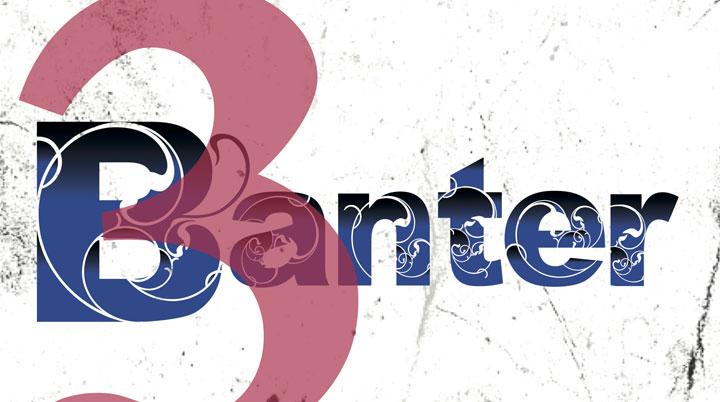 Banter have been with us what seems but a short while, actually six years, in that time they’ve established a deserved reputation for daring, creative diversions and good time gigging. Even as they wrote and shoved huge chunks of funk and jazz into the process somehow they retained their roots and here with the cannily titled ‘3,’ they dive back into those folk sources they originally built on. Trad is everywhere; it’s how it’s used which makes all the difference.

Taking traditional lyric, adding your own tune was a trick Steeleye polished to a  shine in the mid 70s, Nina Zella’s done the same thing here with a bunch of melodies which echo folk but display plenty of other healthy influences, blues and pop being a couple. Add in Simon Care’s ritual dance experience and Tim Walker’s off the wall instrumental approach, there you have a cocktail just waiting to fizz and spill out of the glass all over the table. Now what could make it do that? Why toss in a couple of heavyweight ‘names,’ to add their own bubbles… enter John Spiers and Phil Beer squeezebox and fiddle a piece.

Opener ‘The Labourer,’ is of Copper Family stock bounces in and jogs along in an almost Albion Band manner, sunny and bright throughout, you can hear it as a concert starter for certain. Ensuing ‘Forsaken Mermaid,’ is a lovely lilting, ghost story, which Zella weighs carefully with washes of keyboards and a soft core vocal. Similar in subject matter the jazz driven ‘Unquiet Grave,’ sung by Walker in serious tones and Zella interjects with proggish touches, Phil Beer’s echoing fiddle running counter to the harmonies and groove. Whilst some tracks are familiar ‘ The Hitchin May Day Song,’ is from Hertfordshire and follows lore with calling at houses, asking for libations, leaving freshly cut boughs of elder and may as offerings. The brass counter usefully samples the Cornish Furry Dance tune, which recalls nothing more than an acoustic Home Service; no higher praise, I reckon.

This being Banter you’re never more than a few minutes from a ceilidh, the instrumental tracks are equally diverse, ‘Moll In The Wad,’ is a pleasing piece of topsy-turvy improvisation on an old Morris variation, whereas ‘Tide A’ Flowing,’ isn’t the Shirley Collins song but resets an Edward II number which they issued on an old Cooking Vinyl sampler.

Mention must be made of the natty sleeve and chattily informative notes for each song which even goes as far as listing alternate titles found the length and breadth of these islands, lots of tongue in cheek moments including a marriage along the way!

Where this crew will go next, your guess is as good as mine, though I’ll raise the point that whilst they are so strongly inclined to the trio format it would still be great to hear them with a decent electric bass player like Rick Kemp who’s also got the instrumental and improvisational chops to add further colour to their palette.